The First Human Voice on Mars is a Black Manâ€™s 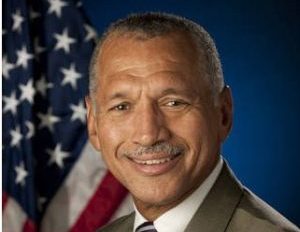 In 2012, NASA scientists achieved a remarkable feat: beaming a human voice to Earth from another planet for the first time in history.

The planet was Mars and the voice was that of a black man’s–and no, not Morgan Freeman’s–rather, Charles Bolden Jr., who is also the first African American to head NASA.

The Curiosity rover broadcasted Bolden’s voice to Earth. In his transmittedÂ message, Bolden called the Mars mission, “an extraordinary achievement.â€

“Landing a rover on Mars is not easy–others have tried–only America has fully succeeded.”

Bolden was appointed NASA Administrator by President Obama in 2009. From his biography on NASA’s website, he was born in 1946 in Columbia, S.C. and received an appointment to the U.S. Naval Academy after graduating high school.

He earned a Bachelor of Science degree in electrical science in 1968 and was commissioned as a second lieutenant in the Marine Corps. After completing flight training in 1970, he became a Naval Aviator. He flew more than 100 combat missions in North and South Vietnam, Laos, and Cambodia, while stationed in Namphong, Thailand, between 1972—1973.

Later, he earned a Master of Science degree in systems management from the University of Southern California. In 1978, he was assigned to the Naval Test Pilot School at Patuxent River, Maryland, and completed his training in 1979. Bolden was selected as an astronaut candidate in 1980.

Bolden traveled to orbit four times aboard the space shuttle–twice serving as mission commander, and twice as a pilot.

Prior to his appointment as NASA Administrator, he was the CEO of Jack and Panther L.L.C. and was on Black Enterprise’sÂ 2008 list of black corporate directors at America’s 250 largest companies.

The Curiosity rover was originally planned to remain on Mars collecting specimens and taking images for two years. However, NASA scientists have extended the rover’s mission indefinitely. Â