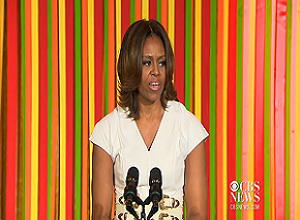 On May 20, first lady Michelle Obama showed her support for arts education by hosting a White House talent show featuring students from poor-performing schools that participate in the President’s Committee on the Art and the Humanities Turnaround Arts program. The show, which was the first of its kind at the White House, was attended by actress Sarah Jessica Parker and even President Obama, who gave remarks on the importance of arts education and congratulated the performing students.

The Turnaround Arts program was created by the White House and the Department of Education as an experiment to see the impact that arts education has on student performance. The program started three years ago in just eight elementary and middle schools, will now expand to 35 schools, as positive student results have already rolled in from its first few years.

“The Turnaround Arts program has exceeded not just our expectations, but our wildest hopes and dreams,” the first lady said at the talent show.

“Math and reading scores have gone up in these schools, attendance is up, enrollment is up, parent engagement is up, suspensions have plummeted and two of the schools in our pilot improved so dramatically that they are no longer in turnaround status,” she added.

The fairly new program will be paid for over the next three years with $5 million in funding from the Department of Education, the National Endowment of the Arts, the Ford Foundation and other private companies.