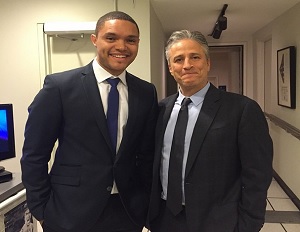 Ever since 52-year-old Jon Stewart announced in February that he would be leaving The Daily Show after a successful 16-year run, speculations have surfaced about who would be chosen to replace the comedian. On Monday, Comedy Central put all the speculations to rest with the announcement that comedian Trevor Noah would be Stewart’s successor.

Noah, who’s name is familiar to some and completely foreign to others, is a popular South African comedian who has been making noise abroad for his funny punchlines that often speak on his unique experience growing up as a mixed race kid in a Soweto township during South Africa’s apartheid era. Traveling the globe with his comedic talent and a mic in hand, Noah has slowly built up a loyal international following that has garnered him more than 2 million followers on Twitter. But for those who know little to nothing about the young comedian who will soon be a regular on our television screen, below are five facts to help you get familiar with the 31-year-old.

1. He has a South African show called That’s Racist where he uses he comedic chops to tackle racial tensions and bring tough social and political topics to the forefront of conversation. He has also served as the host of his own late night show in his native country called Tonight with Trevor Noah.

2. He doesn’t write down any of his material for a show. Instead, he prepares by “living life” and evolving the stories that are of interest to him. He says about 90 percent of everything he says on stage is true and he just finds a way to make it funny.

3. Noah’s unique ability to speak six languages sets him a part from other comedians and makes it easier for him to travel the globe and do stand-up. His first one-man show in Johannesburg in 2009 was documented in the film You Laugh But It’s True, which chronicled his quick rise to success as a comedian.

4. In 2012, he appeared as a stand-up comedian on The Tonight Show and in 2013 he appeared on the Late Show with David Letterman, making him the first South African comedian to appear on both shows.

5. Before being finalized as Stewart’s official successor, Noah became a contributor for The Daily Show in December 2014.