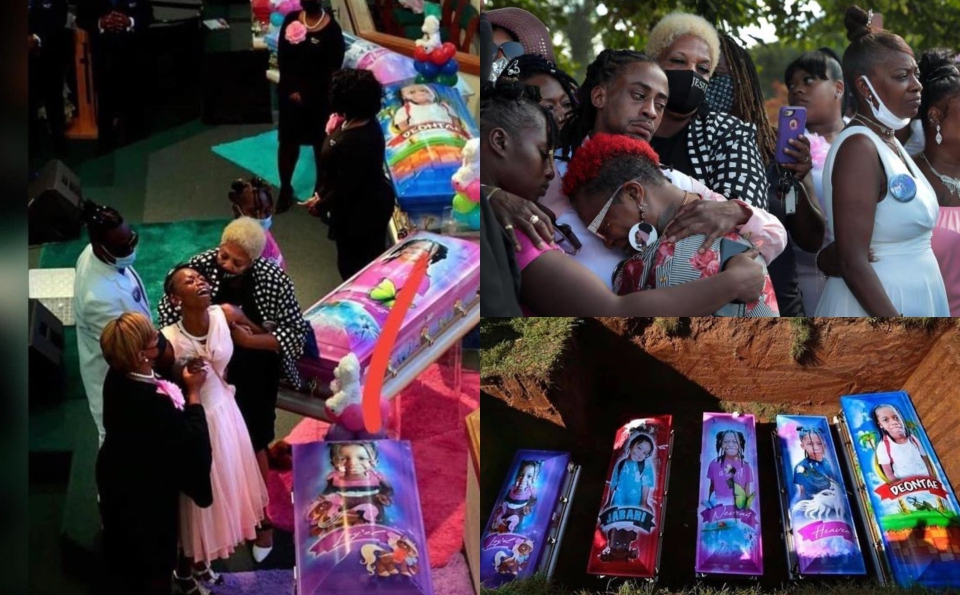 An East St. Louis mother laid all five of her children to rest after being killed in an apartment fire on Aug. 6.

Sabrina Dunigan‘s children were buried in custom caskets on Saturday that featured their pictures, names, and decorations according to their personalities, News Onyx reported.

“These children were wonderful children. If you look at the caskets, each casket reflects their personal desires, the games they played with, the toys they liked, (and) the colors they were interested in,” Serenity Memorial Chapel Funeral Director Walter Terry told Fox 2 Now.

“If you look at the casket, it’s really a glimpse of their young lives,” Terry said.

All of the children were under the age of 10 when they passed.

The children died on Dunigan’s 34th birthday. She was away picking up another adult when the fire occurred. Dunigan’s father and his blind wife lived in a back room and escaped by jumping from the second story.

When Dunigan returned to the apartment, she rushed in to save her children but couldn’t reach them. She sustained burns on her arms and feet as a result.

The family had only lived in the apartment for five months after losing their previous home to a fire.

While the coroner determined the children died of smoke inhalation, the manner of death—homicide or accident—is currently unknown.

Dunigan told the St. Louis Post-Dispatch she suspected a former boyfriend set the fire at their last home but thinks the most recent fire could’ve been due to an electrical problem.

Ultimately, she said she misses her children, especially “their voices and their faces.”

“They didn’t deserve it,” she said.

The incident is currently under investigation.