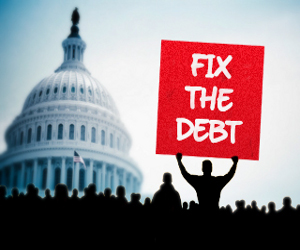 2,500 small business owners have signed on to become part of the bipartisan coalition of more than 315,000 individuals who are part of the campaign to “Fix the Debt.”

The campaign believes that the government must strike a deal to reduce the amount of debt the country currently has, eliminate wasteful spending and ensure social programs are not cut.

“No one knows better than small business owners the importance of keeping your books balanced,” said Wanda Rohm, former owner of a small business, via a statement released by the campaign. “That’s why we’re standing together to tell Washington that it can be done if you’re willing to work together.”

According to the website’s mission statement, the coalition is “[c]oncerned about protecting Social Security and Medicare, burdening future generations with debt, or the economic outlook of the United States, doctors, teachers, small business owners and many more are speaking out and calling on Congress to Fix the Debt.”

A growing chorus of “Debt Deniers” has emerged in recent months. DebtDeniers.com will expose the most dangerous Deniers and counter their claims with facts and data. DebtDeniers.com also outlines the grim reality of what will happen ifÂ WashingtonÂ chooses to ignore our ballooning national debt.

“In recent weeks, a small constituency of Debt Deniers has taken to the airwaves to wrongfully decry the urgency and importance of the nation’s debt situation,” saidÂ Jon Romano, Vice President of Communications for the Campaign to Fix the Debt. “Ignoring the debt and pretending it doesn’t exist will not solve the nation’s fiscal crisis. Many top economists agree: if we do not take major action to alter the trajectory of our debt now, future economic growth could be in serious jeopardy.”