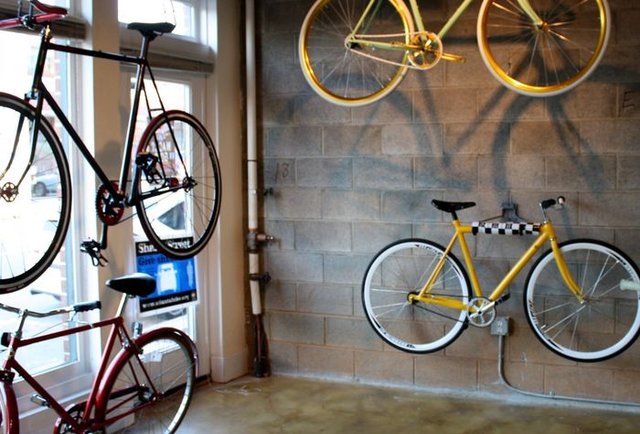 With more young adults and gainfully employed people looking to leave the suburbs in favor of the inner city, bikes are becoming the preferred mode of transportation. Between 2000 and 2010, the number of bike riders in America has grown 40%. And with gas prices rising every year and more parking meters popping up, cars aren’t as attractive as they used to be.

The “Black Meccaâ€ of Atlanta is no different and Mikel Madison took notice.

In 2010, Madison opened Fixie Bicycle Gallery in the city’s Edgewood section just as it was undergoing a facelift. About 15-20 years ago, one block over from the shop, “Sweetâ€ Auburn Avenue was associated with danger and crime. But at the top of the new decade, new developments and city officials sought to revamp the neighborhood. Ironically, Madison’s life was going through a makeover too.

Originally from California, Madison went to school for design and was working for San Francisco-based brand builder Landor. After being let go after a major downsizing, Madison moved to Arizona and then Atlanta doing freelance work and bartending to pay the bills.

“Like any other designer, you look around your surroundings to see what’s needed,â€ he said. “Me doing design wasn’t really benefiting my neighborhood. But I did see how the biking community could use some improvement.â€

Noticing that there were a lot of bikers around where he lived, Madison, using mechanic skills he picked up being raised by an electrician, set-up a bike shop in his loft where he built customized single-speed bikes for his neighbors or whoever wanted to buy one off eBay.

As his clientele grew, so did their want for top of the line bike brands and accessories. Seeing that he would need a brick and mortar to impress bike companies, Madison opened up Fixie Bicycle Gallery and he’s been riding ever since.

The shop has become known for it’s lively, custom made bikes and is becoming increasingly popular among the Atlanta’s hip. With some of its more exotic work hanging in the window, it also doubles as a box of eye candy for passersby.

BlackEnterprise.com caught up with the biking enthusiast to talk about biking culture, how Blacks fit into it and why and how this lane should be one that entreprenuers should consider, soon.

BlackEnterprise.com: Atlanta is a larger city, but not known as a bike city yet. What convinced you that opening this shop was a good idea?

I saw that there was a void in the market. I basically rebuild things that none of the other shops in town want to mess with; I know a lot of stuff. You can bring in your “beaterâ€ and they look at you like they don’t even have time for that, and I get it. I have thousands of random parts over here. I got some older guys that come in here and can’t afford to fix their bikes so I’ll help them out. Right after that, somebody might come in here and spend $2,000, that’s where I make it up. I have a niche market. There aren’t many shops who specialize in track bikes. They don’t delve into getting you what you want.

How much research was put into this?

Before I even opened my doors, I was doing research and development for over 2 years. If you don’t know, people who like bikes are usually snobs as they know a lot of history about stuff, the parts, and what they are made of. Half of it is about status too. They want certain brands of stuff so that people will envy them. People have an attitude of spending money; it drives the economy.

So it’s similar to car culture?

Absolutely. But, no matter what, you’ll always save more money on a bike, no matter how much you spend. To own and drive a car costs you at least $8,000, yearly. That’s just to drive it, gas, maintenance, insurance, and lets say parking tickets. We’re not even talking about your car-note. You’re not going to spend $8,000 on a bike, even if you’re balling. People that do spend a lot of money on bikes, race and have sponsors, and those materials cost money.

The bike market is weird because you have the common folk who don’t understand that you have to spend $500 on an entry level bike. They see $150 bikes at Wal-Mart and go for those. I know they look new and clean, but the parts will break in 6 months. When I was doing research, people said I needed to order parts from China. I could have ordered 500 bikes at $40 a piece from there. But that lets me know the parts aren’t about nothing. I sell handle bars that cost $40. I don’t want to be known for selling a bike that’s cheap. Every bike here is touched by human hands and thought about from functionality to style to what this person will get out of this bike. People will get a bike but people will only buy the bike if they get compliments about it. Just like why people buy a nice car. You can get a Benz or BMW and say it’s because of safety. But you also got that car because of status.