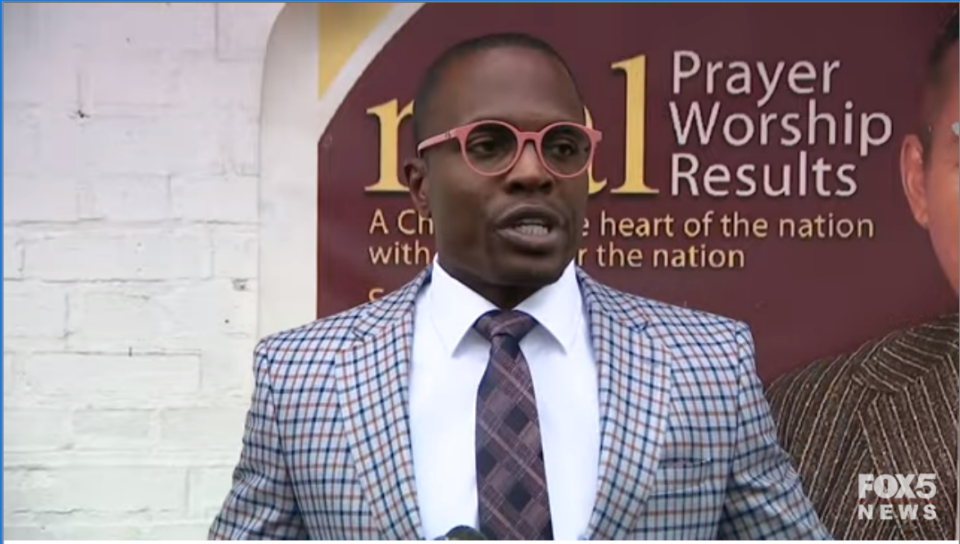 Bishop Lamor Whitehead, the Brooklyn clergyman robbed during a live stream of his service, decided to reenact the bizarre events of that fateful day at his prayer meeting Sunday, The New York Post reported.

Whitehead prostrated himself on the parquet flooring near his dais to illustrate his point of perseverance to his congregation.

“I need you to get back in position when them three men came in here with them guns out. I gotta get back into position,” Whitehead said.

The bishop said to his church members that God would “double” what he lost, drawing upon reference to King David of the Bible when David battled the Amalekites who captured his wives, according to the Post.

“Don’t think that God allows somebody to come here and steal something for him not to give us double. This is what the Bible says,” Whitehead said. “David recovered all.”

Critics have accused the pastor of orchestrating the jewelry heist as part of an elaborate scheme to collect an insurance payment, an allegation he vehemently denies.

Whitehead held a press conference on Friday in front of his Canarsie church where the crime happened last weekend, CBS News reported.

“And he must’ve knew something about a robbery. Are you kidding me? Let my church, give us some sympathy,” he said.

Three gunmen were caught on video stealing the bishop’s and his wife’s jewelry. According to police, the value of expensive baubles is close to $1 million.

Whitehead says the community should focus on apprehending the thieves instead of scrutinizing his lavish lifestyle and his past criminal history, CBS News reported

“Why is Fendi, Louis and Gucci, why can’t we wear that in the church?” he said. “I’m not on a salary with my church. It’s about having multiple streams of income. That’s it.”

The pastor is also contesting a recently filed lawsuit accusing him of bilking $90,000 from a former church member.