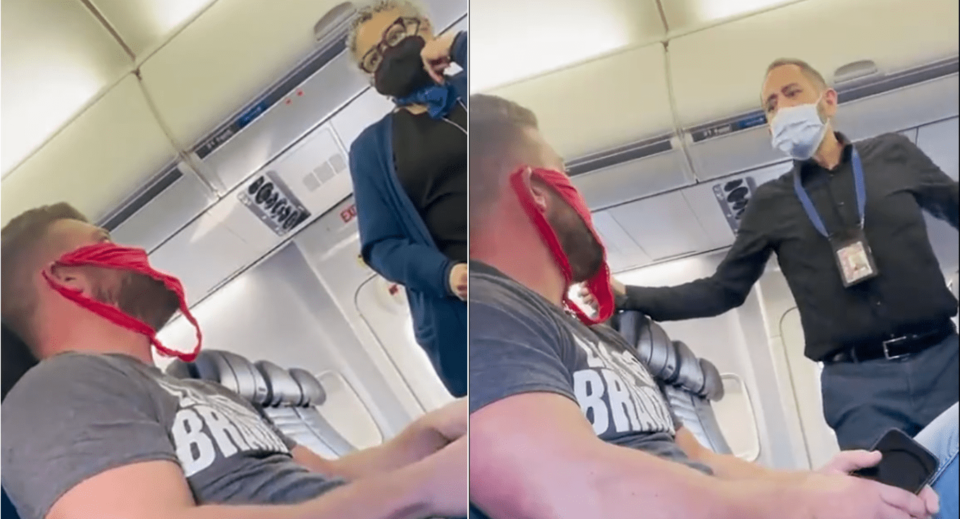 When it comes to underwear, thongs are made to be hidden between your butt cheeks. But one Florida man made a mockery of himself when he put thongs on the wrong cheeks and got banned from United Airlines for wearing a woman’s thong as a face mask.

Adam Jenne was removed from a flight traveling from Fort Lauderdale to Washington D.C. because of the lacy and racy red thong worn around his face instead of an actual face mask, NBC 2 reports. Jenne got the boot on Wednesday before the flight even took off.

“It’s all nonsense,” Jenne said of the mask requirement aboard planes. “COVID doesn’t know that we’re at cruising altitude. It’s stupid. The whole thing is theater.”

“I think the best way to illustrate absurdity is with absurdity,” Jenne added.

Apparently, Jenne has been wearing the red panties, and sometimes he gets lucky enough to make it to his final destination.

“Every single flight has been met with different reactions from the flight crew,” Jenne said. “Some with a wild appreciation, others confrontational.”

But this time around, the Broward County Sheriff was waiting for him upon his removal from the flight.

“Eventually, they called TSA and airport security,” Jenne recalled. “I ended up staying at the gate for about 45 minutes.”

Jenne claims there were even some passengers who followed his lead.

Despite getting kicked off the flight, Jenne said he planned to wear the red thong again for his Thursday flight on Spirit Airlines.

“Hopefully, Spirit Airlines has a better sense of humor,” he said.

“The customer clearly wasn’t in compliance with the federal mask mandate and we appreciate that our team addressed the issue on the ground prior to takeoff, avoiding any potential disruptions [in] the air,” the airline said.

Absurdity is at an all-time high this season. Be safe!