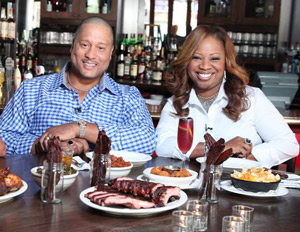 The Neelys, the popular cooking duo who endeared themselves to audiences on Down Home With the Neelys, cooking savory foods with a heavy dash of on-camera affection, announced they are closing their restaurants in Memphis indefinitely.

“We’re gone so much and involved in so many projects that it’s been really difficult to concentrate on the restaurants here like we need to,” Gina Neely told the Memphis Commercial Appeal.

In a statement via Facebook, the couple thanked fans for their support.

“Gina and I want to thank you, our followers and fans for your continuous loyalty,” the couple said in a statement. “We want to say from the bottom of our hearts how much we appreciate you. We want to share with you that we have closed the Neelys Bar B Que restaurants in Memphis, Tennessee indefinitely. We want to invite you to continue to support our New York location. Again we want to thank you for your continuous support.”

The Neelys were asked about the Paula Deen controversy — with whom they have a relationship through the Food Network — and they chimed in.

“We were shocked and saddened to learn of the comments from Paula Deen. Racism of any kind from anyone is simply unacceptable and cannot be tolerated,” the Neelys told ET Online. “In our own relationship, Paula has shown us kindness and generosity. We trust that Paula’s apologies are sincere and hope there is a positive lesson to be learned from this situation.”

The food blog Grub Street openly speculated the timing of the changes in Memphis could be due to a yet reported business alliance with Paula Deen.