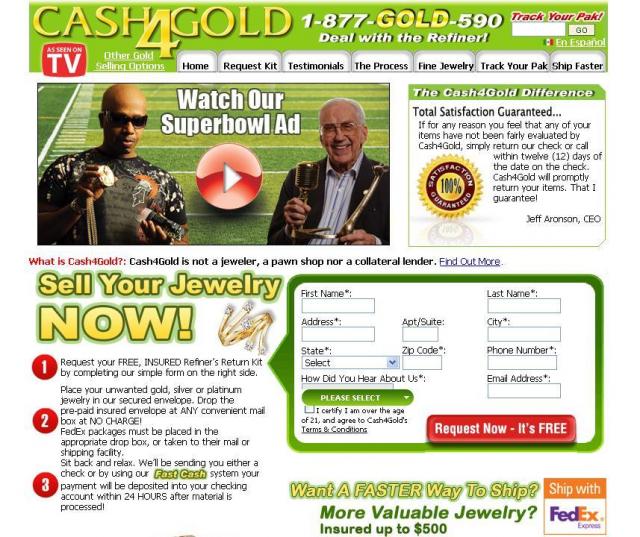 Out of all the cash for gold companies shilling on television, Cash4Gold has managed to ascend the ranks from late night informerical-esque advertising to ubiquitous primetime spots featuring Publishers Clearing House pitchman Ed McMahon and too-legit-to-quit rapper MC Hammer — who are both ironically notorious for their financial woes. Promising quick and easy cash for your scrap gold, the company has been a go-to gold buyer for folks seeking to bring in extra money.

There’s something about mailing in gold jewelry for “cold hard cashâ€ that doesn’t sit well with me, especially when there are pawnshops and jewelers in just about every downtown, USA. Well, earlier this month the fine people over at Good Morning America confirmed my suspicions, by conducting their own cash-for-gold test, sending off three packets of jewelry all appraised at $350 to mail-in gold companies. Get Gold Cash offered $206 and later raised its offer to $275. Dollars 4 Gold offered a measly $89.71, claiming some of their pieces were only 10 or 12 karats.

So, what did the Grand Puba of this burgeoning industry offer? A whopping $66.05! When GMA asked for its gold back, an option available to dissatisfied customers they were made another offer of…$137. The company later explained that it reevaluated the packet and one of the pieces could be sold “as-isâ€ instead of being melted down, giving it more value.

For those especially pressed, Cash4Gold offers a “fast cashâ€ deal, which directly deposits funds into your checking account within 24 hours. The caveat: gold sellers are stuck with the offer with no chance of getting the jewelry back.

Some might call it a scam; I call it highly dubious business practices, especially after what Jeff Aronson, Cash4Gold CEO, told GMA: “That’s what the material was worth to me at that time.â€

In a statement sent Tuesday, Aronson said, “our prices are based solely on the precious metal content of the goods, which are weighed and thoroughly tested before ultimately being melted down. We pay our customers between 20 and 80%Â  of spot price with the larger amounts going to people sending in more than 10 ounces of gold.”

But that doesn’t explain why three different companies offered three vastly different prices for the same items. Apparently, value is dictated by whichever way the wind blows, so much for market value.

“We’ve seen checks [from Cash4Gold] that have been written out for two cents,â€ says Brodie White, president of the South Florida Better Business Bureau (BBB).

Cash4Gold has conducted more than 700,000 transactions since it was founded in 2007, and currently has a “D rating” with the BBB. There have been more than 319 complaints filed with the consumer advocacy agency.