After an 11-year absence, the current-generation Taurus was resurrected in August 2009. While the 2011 model is basically a carryover from last year, this premium-class family sedan is still worth highlighting, specifically since this is Black History Month.

See, the exterior designer of the Taurus SHO AWD Earl Lucas, who happens to be an African American, was responsible for putting the swag back in Ford’s flagship vehicle, after the previous design flopped. Lucas attended design school with his friend and cross-town competitor, Ralph Gilles, who was responsible for the once fresh-looking Chrysler 300. (A refreshed, high-tech Chrysler 300 will be hitting the streets soon.)

In the meantime, let’s pop the hood and see what the 2011 SHO has to offer.

The 2011 Taurus is packed with so many industry firsts for a car in its class and price point ($25k MSRP), there’s no way you can own the vehicle without opting for all of the following high-tech safety features. The top of the line SHO I reviewed, with the funky-looking 20-inch wheels, was equipped with a voice activated navigational system, adjustable pedals, a back-up camera, 10-way power heated and cooled suede and leather front bucket seats, heated rear seats, rain sensor wipers, automatic high-beam headlights that were equipped to turn-off-and-on while driving down dark roads, a premium 10-speaker DVD/CD Sony audio system, a keyless push button ignition system and a power sunroof.

If that’s not enough, the vehicle I reviewed was also equipped with a number of high-end features typically not found in American vehicles. For example, our Taurus SHO was outfitted with an Adaptive Cruise Control system, which automatically gauged the distance of the lead vehicle by lowering and increasing speeds as needed, working in conjunction with Ford’s integrated Collision Warning with Brake Support system, which automatically applies the brakes and helps the driver stop quickly, when needed.

And, the full size sedan was equipped with a Blind Spot Monitoring System, which alerts the driver of vehicles in its blind spot via blinking lights on the outside mirrors, and audible chimes, before changing lanes. Oh, and I can’t forget the power rear sunshade, which is typically found in premium price imports not an American made vehicle. (The Buick Lacrosse offers a power sunshade.) Ford’s industry exclusive voice-activated SYNC system is integrated into the vehicle too, which analyze the health of the vehicle, contacts 911, when needed, and works in connection with your MP3 player, iPod, memory stick or PDA. The vehicle reminded me of a rolling smartphone.

Wow, there were so much that made the SHO rock that I had difficulty narrowing it down to just a few features. With that said, I was extremely impressed with the Cross Traffic Alert system. What’s that, you ask? When a driver is backing out of a parking space, this system warns them of cross-traffic that appears via audible chimes. Basically, it serves as an added safety aid and can be used in conjunction with the rear-view back-up camera, reducing the chance of a rear collision.

Also, the Taurus I reviewed included massaging seats for both the driver and front seat passenger. Not only did the seats automatically caress my lower back, but my, uhm, posterior anatomy, too. This is a great feature for those experiencing minor back pains and for keeping long-distance drivers awake.

Even more importantly, I can’t forget the stylish, but not too flashy, import-like classy design of this full size sedan, with the blended rear spoiler and bold new European-styled headlights. Overall, it’s just hard to believe this is a Ford or, for that matter, a Taurus, after the previous generation’s conservative bland design.

Because of Ford’s squeamish budget, the Taurus wasn’t built on a rear-wheel drive platform like its competitor the Chrysler 300. Furthermore, it would have been great if the $45,000 Taurus SHO AWD I reviewed was equipped with a power tilt-and-telescopic steering wheel to compliment the programmable driver’s seat.

Moreover, Lucas should have had a hand in the interior design too, giving the instrument panel a more upscale feel.

If you’ve never thought about a Ford before, this is one you shouldn’t sleep on. While the 2011 SHO has moved upscale, with all of its technological safety features, the unique sport-tuned suspension still makes this smooth-riding road runner fun to take for a spin on short drives or long trips, unlike many imports.

Available in four trim levels, the Taurus SHO is not only capable of seating five comfortably, but, more importantly, at an affordable price point. Base pricing for a front-wheel drive Taurus starts out at around $26,000 and can easily climb to $46,000 for the high-end all-wheel drive like the top of the line Taurus SHO I reviewed. If you’ve never driven an American vehicle before, this is one you should take for a spin before finalizing the car shopping process.

There isn’t another vehicle on the road today you can find equipped with all of these high-tech features in such an affordable package. The Ford Taurus is definitely a winner in my book. And since sales dipped last month, there shouldn’t be any problem getting a discount on the Taurus.

Jeff Fortson is an auto analyst and editor of a car-buying website for women and minorities. To get the latest updates on the auto industry, drive on over to JeffCars.com.

Be sure to check out these other car-related posts… 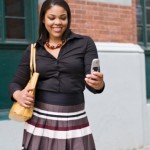 Single-Minded: On Living the Jet-Set Life