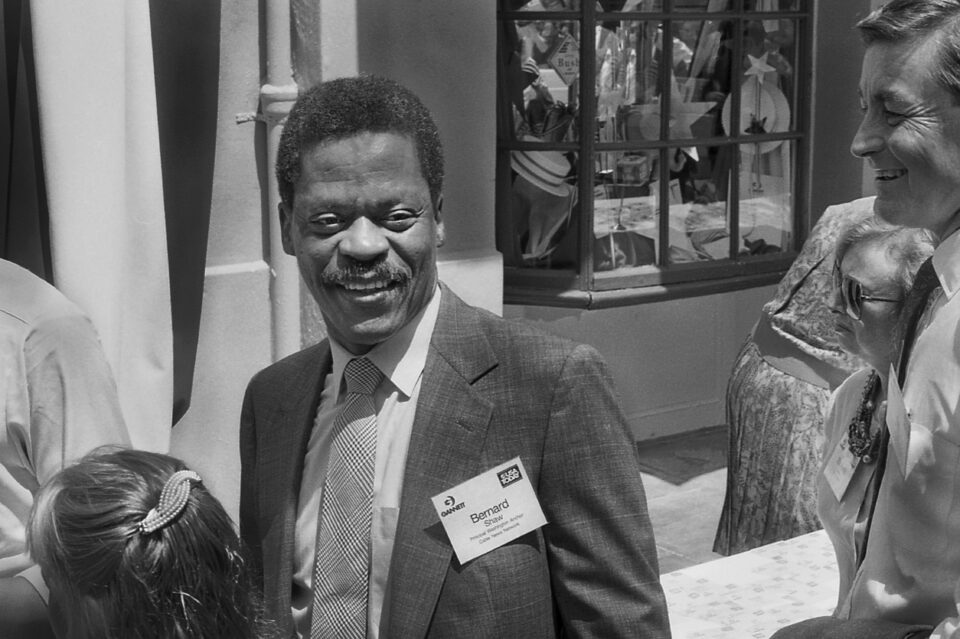 View of American broadcast journalist Bernard Shaw as he smiles at unidentified others during an unspecified event, New Orleans, Louisiana, between August 15 - 18, 1988. The event was held concurrently with the then-ongoing 1988 Republican National Convention. (Photo by Ed Lallo/Getty Images)

There is sad news coming from the CNN newsroom as it was reported that former anchor Bernard Shaw has passed away at the age of 82.

According to the news outlet, Shaw passed away from pneumonia on Wednesday, September 7.

“In lieu of flowers, the family requests donations be made to the Bernard Shaw Scholarship Fund at the University of Chicago. The Shaw family requests complete privacy at this time,” the family said in their written statement that has been provided by former CNN CEO Tom Johnson.

The family has stated that, although there will be a public memorial service planned for the future, the funeral services for the former CNN anchor will only be for family and invited guests only.

When the network first debuted on June 1, 1980, Shaw was CNN’s first chief anchor. Over 21 years later, he stepped away from the television screen on February 28, 2001. His resume included stints with CBS as a political reporter from 1971-1977, where he left to become a Latin America correspondent for ABC until 1979. The next year, he joined CNN for the launch of the new news network.

Some key moments from his long career at CNN:

On October 13, 1998, he moderated the second presidential debate between George H. W. Bush and Michael Dukakis.

April 27, 1991, is the date that The University of Illinois Foundation started the Bernard Shaw Endowment Fund.

He was also Inducted into the Broadcasting & Cable Hall of Fame in 1991.

On November 10, 2000, Shaw informed the world that he was leaving CNN.

The next year, in 2001, the former anchor was given the Edward R. Murrow Award for Lifetime Achievement Award in Broadcasting.

February 28, 2001, was the day that Shaw officially retired from the CNN network.

He accepted the Chuck Stone Lifetime Achievement Award from the National Association of Black Journalists in 2007.

“CNN’s beloved anchor and colleague, Bernard Shaw, passed away yesterday at the age of 82. Bernie was a CNN original and was our Washington Anchor when we launched on June 1st, 1980,” Chris Licht, CNN Chairman and CEO, said in a written statement Thursday. “He was our lead anchor for the next twenty years from anchoring coverage of presidential elections to his iconic coverage of the First Gulf War live from Baghdad in 1991. Even after he left CNN, Bernie remained a close member of our CNN family providing our viewers with context about historic events as recently as last year. The condolences of all of us at CNN go out to his wife Linda and his children.”