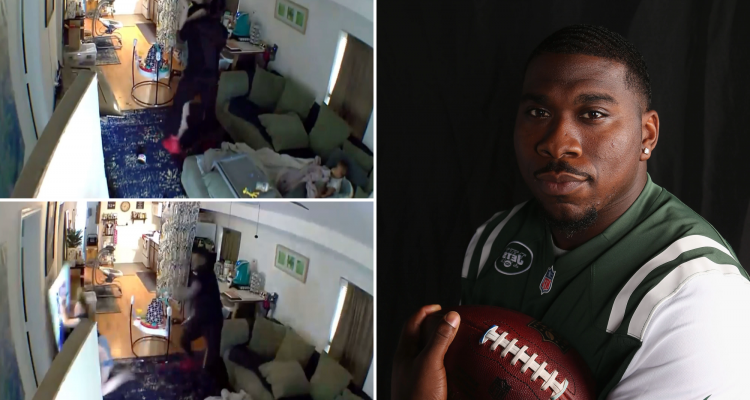 A brutal beating of a woman who is the mother of an ex-NFL player’s child was caught on video and posted on social media, and after the clip went viral, the man who beat her fled the state. Now, according to USA Today, that man has been arrested after turning himself into police officials.

Former New York Jets‘ player, Zac Stacy, was seen viciously beating his child’s mother in a video posted on social media and quickly went viral. The child’s mother, Kirstin Evans, is seen in the video surveillance being thrown around in front of their 5-month-old son as he is crying. The video was posted on Twitter.

Home video captures former NFL running back Zac Stacy savagely beating the mother of his child & throwing her around like a rag doll in Florida. The child was just feet away. Zac Stacy played for St. Louis Rams & the Jets. pic.twitter.com/ikI38QqdAu

Evans later posted that she had previously filed police reports, and nothing had been done up to that point.

#zacstacy #domesticviolence The Florida justice system has been failing me. I have filed police reports previously and the State Attorney hasn’t picked them up. Other women fall victim to this everyday. Please call attention to the Florida State Attorney. pic.twitter.com/ugaXNdSfzR

Stacy was arrested Thursday night in Florida after reportedly being on the run. According to Orange County Corrections Department records, the 30-year-old former NFL running back who played for the New York Jets and the Los Angeles Rams was charged with aggravated battery and criminal mischief for the assault captured on video.

Evans set up a GoFundMe account in support of domestic violence abuse victims.