Former NBA Player Embarks on a New Career at Starbucks 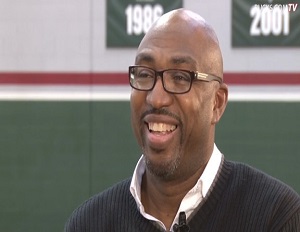 Known as one of the greatest collegiate basketball players at the University of Hartford, Vin Baker had a promising career ahead of him after being the eighth overall player pickedÂ in the 1993 NBA draft. But like many young players with loads of money and fame at their fingertips, Baker faced a rocky road during his 14 seasons with the NBA where he made a total of $97.4 million.

In 2004, while playing for the Boston Celtics, Baker’s clash with coach Jim O’Brien ultimately revealed his issues with alcoholism as he later told the New York Daily News in 2013 that by then he was leading “a double life” as a star power forward at TD Garden and a binge drinker on the side. After being suspended three times by the Celtics the team ultimately terminated his contract with nearly $35 million left. Following his NBA career, which ended in 2006, the star athlete faced several financial problems including the 2008 lost of his home in Durham, Connecticut, a failed restaurant business, a 2012 lawsuit against his accountant for mismanagement of funds and breach of contract, and a 2014 auction of the gold medal he won at the 2000 Olympics.

“When you make choices and decisions and think that it will never end, and then you get into spending and addiction and more spending, it’s a definite formula for losing,” Baker told the Providence Journal.

Now, four years clean of his addiction, Baker is working as a barista at a Starbucks in North Kingston, Rhode Island as part of his training to become a manager. He thanks Starbucks CEO Howard Schultz, who is also the former owner of the Seattle SuperSonics, for the opportunity and prides himself on using his mistakes and upsets in life to teach a lesson to the next generation of athletes about making smart and sound financial choices.

He recently accepted an invitation from former teammate, Jason Kidd, to work with the Milwaukee Bucks coaching staff in the Las Vegas Summer League. There he counseled current and former athletes on the challenges they face, with many having financial stories that were once similar to his.

When asked what sits at the top of his list of talking points, the former NBA player said, “I’d want guys to not take the money for granted. It can be here today and gone tomorrow. It can be gone from the wrong financial choices and decisions and people that you’re involved with or, in my case, gone from the things you struggle with off the court. As quickly as that contract can be signed, there are a hundred things that can also ruin it.”

He advises players to monitor every single dime that comes out of their account, adding, “My check here I know exactly where my money goes. Don’t trust it with an accountant or a family friend. Make sure you’re aware and be responsible because next thing you know people are stealing from you.”

While many may view Baker’s story as one of unfortunate failures, the 43-year-old says his story is one of redemption, of conquering demons, and searching for success in the next phase of life.

“For me this could have ended most likely in jail or death. That’s how these stories usually end,” he said. “For me to summon the strength to walk out here and get excited about retail management at Starbucks and try to provide for my family, I feel that’s more heroic than being 6-11 with a fade-away jump shot. I get energy from waking up in the morning and, first of all, not depending on alcohol, and not being embarrassed or ashamed to know I have a family to take care of. The show’s got to go on.”