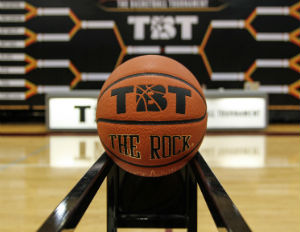 Last year’s inaugural summer competition, ‘The Basketball Tournament’, drew players and coaches from around the country for a chance to play for the $500,000 grand prize. 32 teams showed up, made up of former NBA players, recent NCAA standouts, and the country’s best playground ballers. The winners, a team made up of recent Notre Dame alumni, took home the grand prize, and put the target on their jersey as the team to beat. This year the ‘Notre Dame Fighting Alumni’ return to defend their title with a team includes Ben Hansbrough, Tim Abromaitis and Torin Francis – but the stakes are higher and the competition is plentiful, with 97 teams vying for the now $1 million grand prize.

As ESPN.com’s Jeff Goodman reported Monday, this big-time event “started with a bunch of guys who have some money and had an idea. They felt like there was a void in this time of year–after the NCAA tournament, after the NBA Finals–for basketball. They wanted to come up with something in which anybody could really participate.”

“To grow from 32 teams in 2014 to 97 teams in 2015 serves as a testament to the open tournament model,” TBT Founder/CEO Jon Mugar said in a statement. “There are an extraordinary amount of sports fanatics that want to step into the role of team owner or GM, build their own franchises from scratch, and compete in an event that pays off with live game coverage on ESPN.”

This year, the single-elimination tournament will feature more than 40 former NBA stars, including Jason Williams, Brian Scalabrine, Nate Robinson, Smush Parker, Hakim Warrick, Dionte Christmas, Mardy Collins and Damien Wilkins among others. Also, per a CBS report – ‘while no current NBA player is playing in TBT, some players will be coaching or serving as a team’s GM. San Antonio Spurs forward Matt Bonner helped to organize a team that has former NBAers like Jason Williams and Brian Scalabrine. Lakers guard Nick Young is coaching the LAUNFD team which is made up of players from LA’s Drew League’.

The tournament begins the weekend of July 10-12, and the field will be split up into four regions: Philadelphia (Northeast), Atlanta (South), Chicago (Midwest) and Los Angeles (West). The semifinals and title game will be held at Fordham University in New York on Aug. 1-2 on ESPN, where the winning team will take home the $1 million prize.

[Below: Check out the recap from last years tournament]