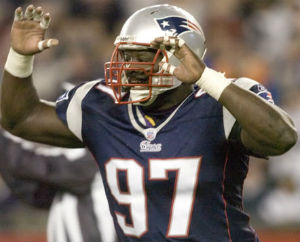 It’s a real wonder that former NFL defensive lineman Jarvis Green never saw himself as a possible major player in the food industry. After all, he used to own a wine and spirits shop near LSU, where he terrorized offensive lines in the Southeastern Conference from 1998 to 2001. He tried his hand at running a restaurant.Â Even his wife, Rakia, is a pastry chef.

“Growing up in Louisiana I’ve always been around food,â€ he said during a recent phone interview. “I’ve always loved to entertain, cook and have fun around food. It’s a big love of mine.â€

Green had always seen himself overseeing construction projects.Â But food is where his heart — and entrepreneurial spirit — is.

In support of the Jarvis Green Foundation, which supports and empowers vulnerable and disadvantaged mothers, Green started the Jarvis Green Foundation Wine Tasting. The foundation raised thousands for victims of Katrina, as well as for the son of Marquise Hill, who played three seasons for the Patriots. A close friend of Green’s, Hill, also a former LSU standout, was killed in a jet skiing accident in 2007 on Lake Pontchartrain.

Green, 34, will attend the New England Food Show to be held this year in Boston from March 10-12. As a board member for Innovative Food and Biotechnology Group, which provides domestic, wild caught shrimp using sustainable practices across the board. The former Patriot cuts an imposing and memorable figure in Boston: he was a key member of the 2003 and 2004 Super Bowl teams and a model citizen off the field.

Being a former Patriot “helps a lot because a lot of time the biggest thing in business is just getting in the door,â€ he said. “I still have a lot of contacts and a lot of friends, folks who are doing really successful things and I’ve been pretty good about not burning any bridges. The way I look at it is, ten percent of the people you’re in a restaurant with are the movemakers. Those are the people you want to network with.”

“Fortunately I left New England with a good name. I can go in and close deals and really be able to communicate what the company provides.â€

Green already reached his goal of playing in the NFL. Next in his sights is becoming a major league entrepreneur in the food industry. He has quite the idol: Reginald Lewis, who infamously built Beatrice Foods into a billion-dollar company.

“I have [Alfred Edmond Jr.’s article on Lewis] on my bedside. His accomplishments as the first African American to do that kind of business is inspiring and hopefully one day I can get to that point. I did it in football and now I’m out to make a name for myself in this business. I want to be in this a long time.â€