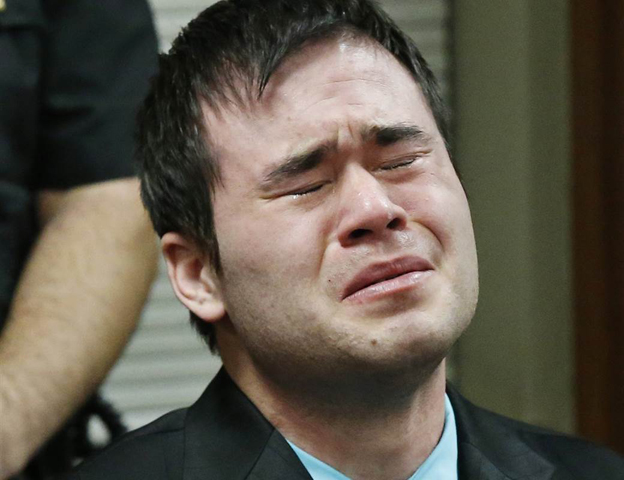 Former Oklahoma City cop, Daniel Holtzclaw, was found guilty on 18 out of 36 counts of rape and sexual battery, and sentenced to over 260 years in prison.

A jury found former Oklahoma City police officer Daniel Holtzclaw guilty Thursday of some of the most serious charges against him, including sexual battery, forcible oral sodomy and rape.

Holtzclaw faced 36 counts. He was found guilty on 18.

The former officer cried openly in the courtroom and rocked in his chair as the verdict was being read. Jurors deliberated for more than 40 hours over four days.

The Oklahoma City Police Department welcomed the verdict. “We are satisfied with the jury’s decision and firmly believe justice was served,” it said.

Sentencing is set for next month.

[RELATED: Police Brutality Also an Issue for Women of Color]

His trial touched upon the explosive intersection of race, policing and justice in America.

Holtzclaw, whose father is white and mother Japanese, was accused of assaulting or raping 13 women, all black, while he was on the job. Court records identify his race as “Asian or Pacific Islander.”

The jury was all-white, composed of eight men and four women.

These racial dimensions energized civil rights and women’s activists to draw attention to the case. Before the verdict was read, Oklahoma City NAACP President Garland Pruitt was concerned about the jury in the case, he told CNN affiliate KOCO.

Benjamin Crump, president of the National Bar Association, was also monitoring the case. He represented the families of Trayvon Martin and Michael Brown. Martin, a black teenager, was fatally shot by George Zimmerman, who was acquitted of charges in 2013. Brown was killed by an officer in Ferguson, Missouri, in 2014.

“We will be here to make sure that this is not swept under the rug,” Crump told reporters after attending a portion of the trial last month. “We come here to stand with these 13 victims of rape, who happen to be African-American women, to say that their lives matter, too.”

In the first pool of 24 potential jurors, there were three black men, but they were not picked for the jury. Two alternates have Spanish surnames. About 70 potential jurors were initially called in for the case, the affiliate reported. Prosecutors would not comment on the jury composition.

At the center of the case was how all victims, ages 17 to 50s, had criminal histories of drug use or prostitution, according to The Oklahoman newspaper.