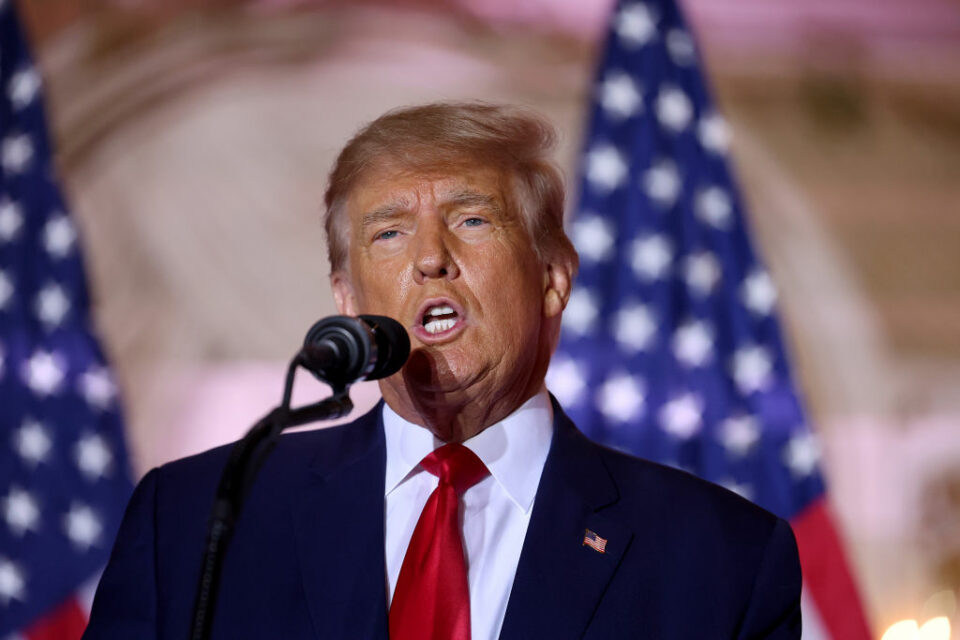 Donald Trump speaks at an event announcing his 2024 run for president at his Mar-a-Lago home on November 15, 2022 in Palm Beach, Florida. (Photo: Joe Raedle/Getty Images)

“We will wage wars against the cartels and stop the fentanyl and deadly drugs from killing 200,000 Americans a year,” Trump said to applause from several hundred supporters. “And I will ask Congress for legislation ensuring drug dealers and human traffickers, who are responsible for death, carnage, and crime all over our country.”

Trump, who is still under multiple investigations, added that every drug dealer on average will kill 500 people with the drugs they sell.

The Washington Post easily debunked that claim, writing that it’s unknown how many drug dealers there are, making it impossible to estimate how many people the average dealer kills. Additionally, according to the National Institute of Health, about 600,000 people died from overdoses between 2010 and 2020.

That means according to Trump’s statistics, there are about 1,200 dealers nationwide. However the U.S. government prosecutes about 20,000 drug dealers per year, according to the U.S. Sentencing Commission.

Additionally, it is unknown whether applying the death sentence to drug dealers can actually happen. In a 2008 ruling, the U.S. Supreme Court said, “The death penalty should not be expanded to instances where a life was not taken.”

However the  High Court did say its ruling does not account for crimes defining and punishing treason, espionage, terrorism, and drug kingpin activity.

Trump added that his plan will reduce overdose deaths by up to 75%. That claim is also bogus as the death penalty has never worked as a deterrent to stopping crime, partly because it’s used so little that researchers cannot accurately measure its impact.

While Trump’s base may have been excited about his announcement and speech, many of his mainstay supporters were not. Fox News cut its live feed of Trump’s speech less than an hour into it and ABC News reporter Olivia Rubin tweeted a video of audience members leaving Trump’s announcement as he was talking—and security staff not letting them do so.

A crowd has formed by the exit of the ballroom as some try to leave Trump’s announcement speech before he has finished…. But security won’t let them. pic.twitter.com/O7C6QJfYgK