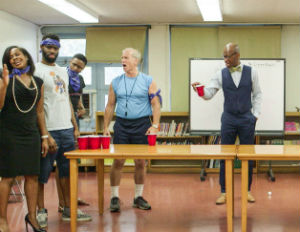 Sabrina Thompson has lived an exciting life. The former TV producer; teacher of English, debate, and public speaking; and second-place Survivor winner is now developing her own Web series based on her experiences as an educator. (You can watch a trailer below.)

“I really loved the staff I worked with. We were family,â€ she says.

She plans to use the series to bridge the worlds between teachers, the small business community, and the show’s viewing audience to help meet the needs of educators nominated by viewers.

Thompson took her second-place winnings from Survivor and invested it in her production company so she could produce the show, called The Department of … Ed.

“It’s a sitcom about the shenanigans that go on in the teacher’s lounge at an inner-city school,â€ she says. “Anyone would enjoy this show after a hard day at work. You don’t have to be a teacher to appreciate it.â€

To create the show, Thompson drew on her own experience working with colleagues at an underserved school in Brooklyn, New York. She says she was also able to survive Survivor–39 days on the island of Samoa with just the clothes on her back–because she had been a teacher.

The former teacher of high school seniors says one purpose of the show is to “save the sanity of teachers–using comedy to get through the day without crying. I describe it as The Office meets Season four of The Wire.â€

After each episode, the viewing audience is invited to nominate a teacher in their community that they think is doing a good job but whose class may have certain needs. The idea is to connect with a small business willing to help meet a deserving teacher’s need for, say, new supplies.

Thompson describes the series as a “vehicle of change.â€

“We want to use entertainment to empower education.â€

And what else is Thompson doing? She has recently joined the team of cinematographers working for Hillary Clinton’s presidential campaign.

Indeed, Sabrina Thompson is living an interesting and exciting life.

Want to learn more? Visit Deptofedtv.com. To support the Indiegogo campaign of The Department of … Ed, go toÂ www.indiegogo.com/projects/the-department-of-ed-a-tv-web-series#/.