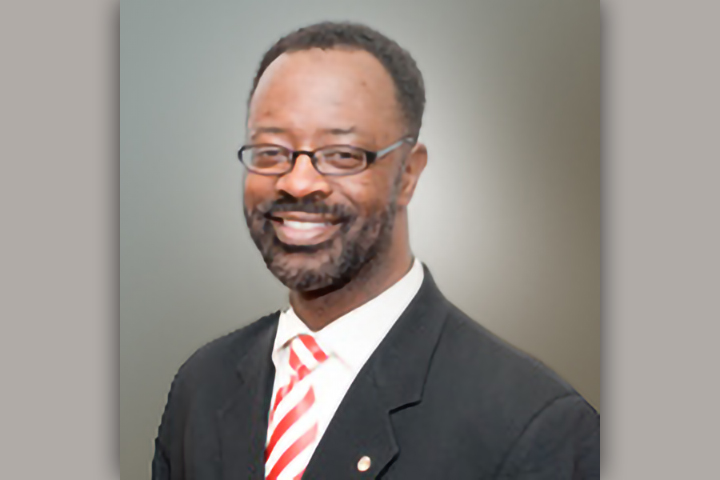 Curtis D. Anderson (Twitter)
For over 30 years, Curtis D. Anderson hammered away to rise from bookkeeper to finance director at one of the nation’s largest and most influential Black college fraternities.
But Anderson’s outstanding rise at Kappa Alpha Psi tumbled drastically Tuesday when he pleaded guilty to stealing nearly $3 million from the 110-year-old organization.
Anderson, 59 of Claymont, Delaware., did not say much at the hearing before U.S. District Judge Timothy J. Savage. But he told investigators earlier that he stole the money to fund a gambling habit during a time while  struggling with alcohol addiction, the Philadelphia Inquirer reported.

Founded in 1911, the fraternity headquartered in Philadelphia has over 125,000 members with 700 undergraduate and alumni chapters in nearly every state across the country. It also has international chapters in Nigeria, South Africa, the West Indies, the United Kingdom, Germany, South Korea, and Japan. The black men’s fraternity counts scores of “Notable Kappas” from areas like sports, business and entertainment. Among them: Arthur Ashe, Wilt Chamberlain, Colin Kaepernick,  Ed Bradley, Cedric the Entertainer, Reginald Lewis, and Robert L. Johnson.

According to prosecutors, Anderson began stealing from the fraternity in June 2012 using checks he either made out to himself or others whose signatures he forged and exchanging them for cash. Santander Bank flagged the unusual transactions and informed the fraternity in 2018.

Anderson was fired in December 2018 after fraternity officials discovered the missing money and confronted him.  Anderson then confessed, telling his bosses he was struggling with gambling and drinking addictions and had spent most of the funds at Harrah’s Casino.

During the hearing Tuesday,  Anderson pleaded guilty to four counts of wire fraud and one count of aggravated identity theft. His sentencing was set for Feb. 22, and he was allowed to stay free until then. The judge noted the maximum sentence could be as high as 82 years in prison and a fine of over $1 million.

Federal sentencing guidelines call for a term of between five to six years in prison, Crawley said.

“He stole nearly $3 million from his former employer that had placed him in a position of trust as the director of finance,” she said. “It was a long-standing fraud scheme to embezzle from his employer over a period of many years. He reaped the benefit of that.”

Brian J. Zeiger, , Anderson’s lawyer, said his client is in treatment for his gambling and drinking addictions.