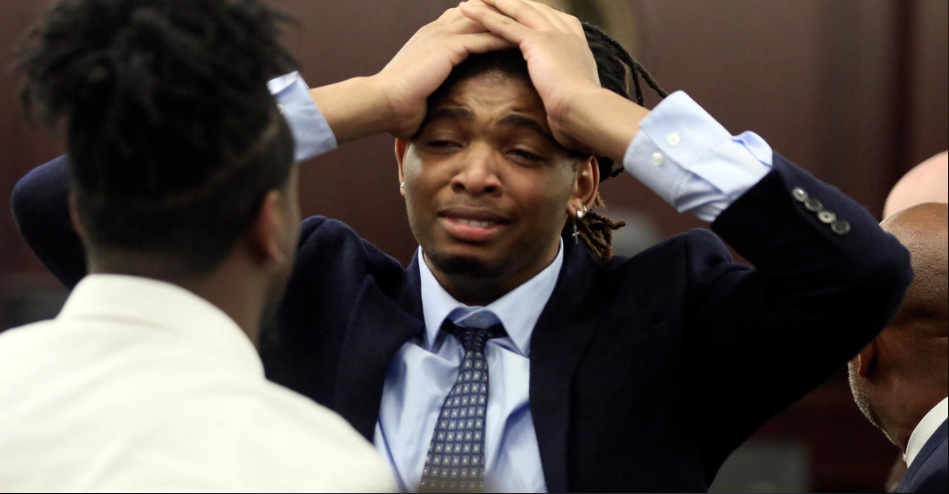 Isimemen Etute is found not guilty by a jury of second-degree murder in the death of 40-year-old Jerry Smith on May 27, 2022. Image Source: WSLS 10

A jury acquitted a former Virginia Tech football player of second-degree murder for the beating death of a Tinder date that he mistook as a woman, according to the New York Post.

On Friday, Isimemen Etute, 19, cried when he heard the verdict of not guilty for the 2021 death of Jerry Smith, 40, due to the argument raised by his attorney Jimmy Turk that he acted in self-defense.

Smith’s family members immediately left the courtroom once the verdict was read, according to CBS News.

A Christiansburg, Virginia, jury deliberated for three hours before reaching a decision, The Roanoke Times reports.

“This is one of the proudest moments I’ve ever had as a lawyer,” Turk said, who has practiced law for 36 years and defended clients in more than 70 murder cases.

“I’m not in shock because it’s the right verdict, but always wondering and worrying about whether you convinced 12 people,” Turk said to reporters. “That’s always nerve-wracking. I’m just thankful for this jury. It is the right decision and right now I’m still just overwhelmed.”

Turk told the jurors of the commonwealth that the evidence was circumstantial, as opposed to the testimony of Etute was more concrete, according to CBS News.

Etute reportedly said he went to Smith’s apartment in April to engage in oral sex after matching with someone named “Angie” on Tinder. The following month, he returned to the apartment to verify if the person he met was male or female, according to The Roanoke Times.

A detective testified that Etute grabbed Smith in the dark before raining down death blows on the man.

A medical examiner concluded that Etute broke every bone in Smith’s face, and some of his teeth were broken and missing, according to CBS Sports.

Etute did not notify police after he attacked Smith, according to the Commonwealth’s Attorney, WDBJ 7 reports.

Turk also reasoned that Smith was “controlling the entire environment and the entire episode,” and Smith “demanded that [the room] be dark,” adding that he hid a knife under his mattress “in case there was something awry,” according to CBS News.

Etute took the stand during the trial and said that he felt “violated” because Smith lied about his gender. The defendant said Smith insisted they meet in the dark, and he saw him reach for a weapon that he thought was a gun.

Turk said the police didn’t question Etute about Smith’s knife or if he felt fear while in Smith’s apartment; two questions Turk believes would have provided insight into Etute’s mental state, and whether he feared for his life and acted in self-defense, CBS News reports.

Jensen contends that Smith was unable to reach for a weapon under his mattress, according to CBS News.

“He could never reach a gun from there,” Jensen said, adding that Etute is an “elite college athlete” with considerable height, weight, and strength, causing a “big disparity” in the situation.

Virginia Tech and the Hokies football team suspended Etute after he was charged with murder.