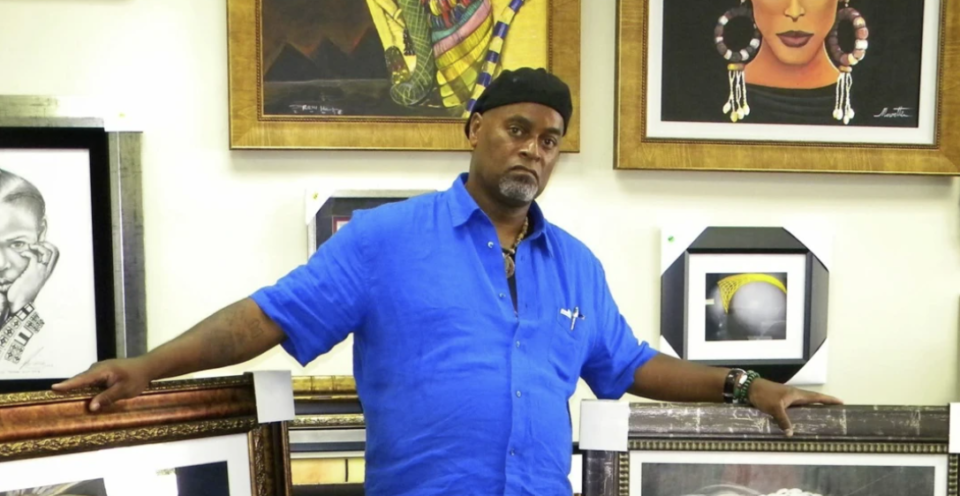 It took just two months for Richard Hutchins to go from a homeless LA-based artist to a high-profile viral sensation with a secured movie role and a roster of A-list clientele.

Hutchins is off of “Skid Row” and currently hosting his own art gallery show/auction at the Sofitel in Beverly Hills after meeting rapper 2 Chainz’s former manager Charlie Rocket. The chance meeting while he was sitting on a shopping cart changed his fate and made him famous.

Meeting in a grocery store parking lot on Easter Sunday, the two hit it off and had a conversation that ultimately worked in Hutchins’ favor.

While speaking with TMZ Live, Rocket recalled how he fell in love with Hutchins’s energy after he jokingly asked to drive his car. The two ended up talking at length, and Hutchins told the industry professional how he used to be a world-renowned artist creating pieces for celebrities such as Muhammad Ali, Richard Pryor, and Marvin Gaye before he fell on hard times.

“He just started showing us his art and that’s what inspired us to make Richard’s dream come true because his dream was simple, ‘I just want people to be inspired by my work,'” Rocket shared.

From there, he helped Hutchins go viral after sharing an Instagram video telling his celebrity friends to support his work.

On his website, Hutchins describes himself as a “homeless artist” with a dream “to make people happy with his art every single day.” It goes on to share his hope of seeing “his art hanging on the walls of a museum.”

Now it’s on display at his own gallery/auction that has brought in the likes of Damon Dash and sold pricey pieces to 2 Chainz, Steve Harvey, and his newest patron Oprah Winfrey.

“It’s my pleasure to meet you,” Winfrey told Hutchins after surprising him with a visit, as captured by E! News. “I saw some of your beautiful art, and I said, ‘Well, I have to get one of those paintings.’ Actually, I think you’re not charging enough money,” the TV and entertainment mogul said.

Hutchins revealed how he’s already made over $200K and has plans of going back to Skid Row to help the community he lived in not too long ago.

He has also been offered a movie role playing none other than an art gallery director who gets to have his real-life work on display in the film.