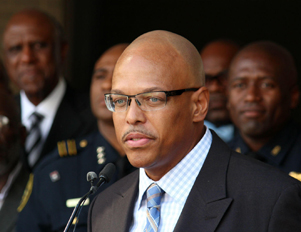 Fort Worth, Texas, has named Joel Fitzgerald as the city’s new police chief, making him the first African American to hold this position.

Fitzgerald, who holds degrees from Harvard and Northwestern University, previously served as police chief in Missouri City near Houston, and most recently Allentown, Pennsylvania. In his new post, he will be tasked with managing a staff of 1,500 officers, which is nearly eight times larger than his department of 200 officers in Allentown.

Fitzgerald’s appointment comes after the city’s last police chief, Jeff Halstead, faced a federal lawsuit from a number of black officers claiming discrimination during his term. Halstead eventually retired from his position in January, with Rhonda Robertson stepping in as interim chief.

As he steps into this new role, Fitzgerald says he’s ready to listen, embrace new ideas, and be transparent with the community.