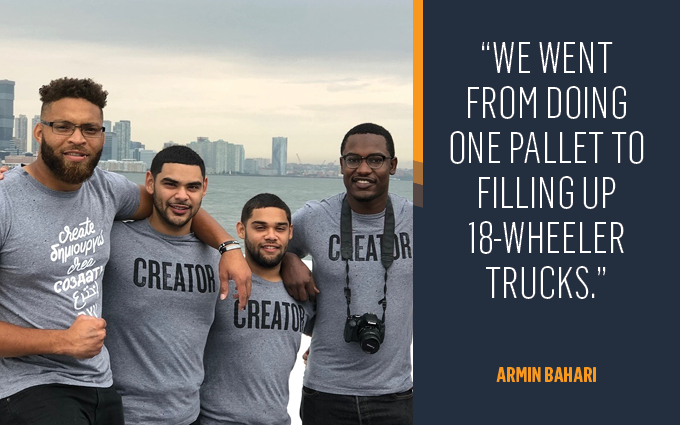 After seeing alternative products for ice cream, cookies, and brownies packaged with protein, Amin Bahari and his twin brother, Amir, found that they could not find the same option for donuts, their go-to late-night snack.

That void—also triggered by a weight loss goal in which the brothers shed a combined 240 pounds in high school by adopting a ketogenic (“keto”) lifestyle—led to a business epiphany. But years later, in college, that success was jeopardized when as broke college kids on a tight budget, they often ate cheap, traditional donuts that were not good for them, late at night.

Along with two college football friends, they wondered why their sweet indulgence could not be turned into a healthy snack. They did just that in 2017 by launching Elite Sweets.

The minority-owned firm is the owner and creator of The Elite Donut. Amin calls the treat a protein-packed, low-sugar donut, and it’s keto-friendly–fitting within the low carb, high-fat diet intended to help trigger weight loss. He says patrons include college athletes, bodybuilders, and others hungry for a healthy alternative that tastes good but isn’t loaded with ingredients that promote sicknesses like diabetes and obesity.

In late 2020, Elite Sweets launched its products in Amazon’s store to help the brand grow. Amin says Elite Sweets leverages Amazon for distribution, elevating exposure, and providing the firm with new strategies to scale. And it’s working. The Elite Donut, which comes in a variety of flavors, including chocolate, birthday cake, and cinnamon sugar, is listed as a “best seller” on Amazon.com

Amin says, “when you can tell them you’re the No. 1 selling donut product in Amazon’s store, that holds weight in any conversation.”

Amin is Elite Sweet’s CEO. He founded the online business with his brother Amir, and two college football friends, Caleb Bluiett and Timothy Cole Jr. The foursome first thought of the concept as students at the University of Texas at Austin. “What we really saw was an opportunity to be the first in the donut market to offer this,” Amin says.

But it was not an easy feat in the beginning. Amin says entrepreneurial inexperience and raising capital were the greatest challenges in getting the venture off the ground. He maintains that the partners overcame the first obstacle by researching, asking customers what they wanted, working with vendors, and learning about recipe development from scratch. They also created a business plan focused on product innovation, distribution, and building an experienced team.

Amin says the partners raised $560,000 primarily through elevator pitches and joining business accelerators. “If we had not been successful [at raising funds], we probably would not be here today,” he reflects.

In 2021, the company raised $2 million in its first round of seed funding led by venture capital firm Siddhi Capital, according to Amin. He says Elite Sweets is using the money largely for growth capital, research investment and development, boosting marketing, and expanding distribution. Amin says he and his brother started producing the donuts from their kitchen at home and expanded to a commercial kitchen where they could increase capacity to “thousands” of pastries. To move to the next level of production and keep pace with orders, they contracted with a food products manufacturer in June 2019.

Now, Amin says the firm expects to sell one million donuts this year, up from about 50,000 in 2019. As such, the audacious entrepreneur anticipates sweet revenues for the company of more than $2 million in 2022, a 42% jump over 2020’s revenue. “We’ve gone from doing one pallet to filling up 18-wheeler trucks,” he says.

The company is looking to expand its relationship with Amazon to sustain that growth. For instance, he says his firm’s donuts are now sold at roughly 100 physical locations nationwide, including nutrition shops and convenience stores. And in a new development, his firm expects to begin selling donuts in Amazon Go convenience stores this March which could increase their physical stores footprint to 1,500 by 2023. “Over the next three years, I’d like to think we can get millions of customers [through] Amazon,” he says.

Amin notes that the program has assisted Elite Sweets by helping the company expand its base and reach new customers who may not have discovered their tasty offerings from its website.

Overall, he believes that selling in Amazon’s store will be a big part of Elite Sweets’ business for years to come.

“It has really been helpful to Elite Sweets to work with [an account manager] inside Amazon who can offer insight on what we should be doing or adjustments we should be making to reach more customers,” he says.