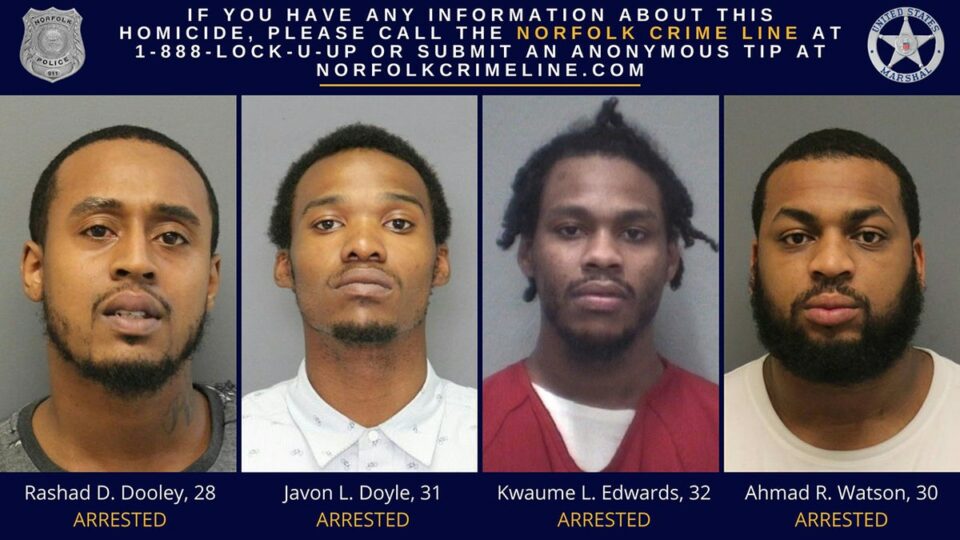 Four men have been arrestested and charged in the death of Elijah Cummings' nephew. (Image: Twitter/FoxNews)

Police in Norfolk, Virginia, have arrested four men in connection to the 2011 killing of Christopher Cummings, the nephew of Congressman Elijah Cummings.

Cummings was shot and killed in his home. His roommate, Jake Carey, was also shot but survived. According to WAVY.com, police told Christopher Cummings’ father James in August 2011 they had strong leads, but needed a break in the case.

It’s unclear what the break was, but police arrested Kwaume Edwards, 32; Javon Doyle, 31; Ahmad Watson, 30; and Rashad Dooley, 28. Each has been charged with 15 counts of homicide, first-degree murder, use of a firearm in the commission of a robbery, conspiracy to commit first-degree murder, and other charges.

“After 10 years this is really a great day for us, because we can’t bring our son back but at least we can make progress going forward,” James Cummings said in an interview on Thursday.

At the time of Christopher’s death, Congressman Cummings, who died in 2019, said his family was “in shock over the news of the random shooting that took the life of my nephew Christopher.” The politician added his nephew was “an amazing young man who was loved and admired by so many people who had the honor of knowing him.”

Norfolk Police Chief Larry Boone thanked the department for working for a decade to close the case.

“For more than a decade now, investigators have been relentless in their efforts to solve this case, they have followed up on every lead necessary to ensure the Norfolk Police Department was able to deliver justice to both the surviving victim and to the Cummings family,” said Boone according to BET. “I want to recognize all the hard work and the level of commitment and professionalism of all those who were involved in bringing this investigation to a close.”

At the time of his death, Christopher Cummings had recently graduated from Old Dominion University with a 3.5 GPA.