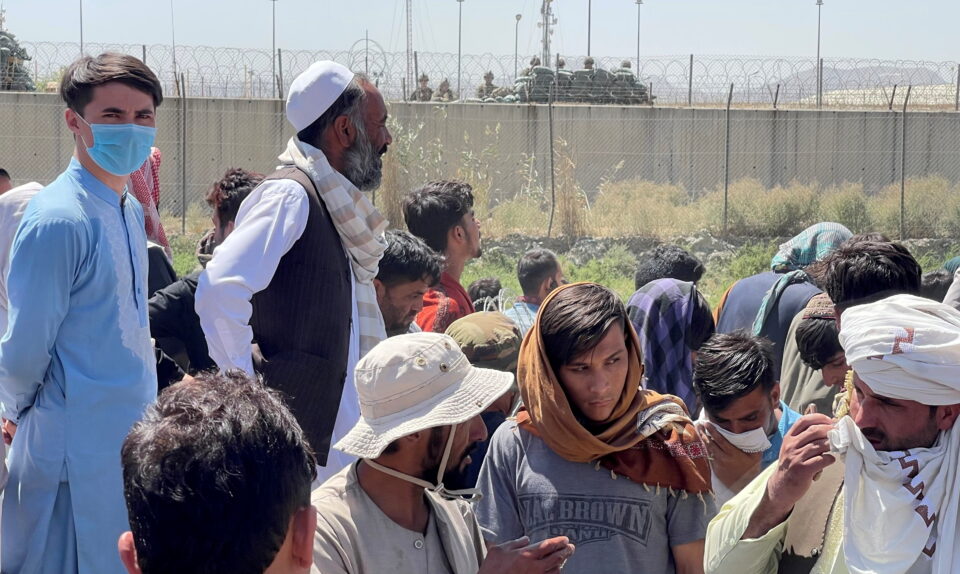 Crowds of people show their documents to U.S. troops outside the airport in Kabul, Afghanistan August 26, 2021. REUTERS/Stringer

Reuters – Four U.S. Marines were killed and three wounded in Thursday’s explosions at Kabul airport, U.S. sources told Reuters, in what the Pentagon said was a “complex attack” during its evacuation mission from Afghanistan.

In a statement, Pentagon spokesman John Kirby confirmed multiple U.S. fatalities but did not give details. The U.S. service members were among those killed when at least two blasts tore through crowds thronging the airport gates.

A U.S. official, who did not want to be identified, told Reuters four U.S. personnel were killed and three wounded. Other U.S. sources gave the same figures.

A Taliban official said at least 13 people, including children, were killed. Video from the scene showed what appeared to be dozens of bodies and wounded civilians.

U.S. officials have said there are about 5,200 American troops providing security at Kabul’s Hamid Karzai International Airport. The attacks came after the United States and allies urged Afghans to leave the area around the airport because of a threat by Islamic State militants.

In an alert issued on Wednesday, the U.S. Embassy in Kabul had advised citizens to avoid traveling to the airport and said those already at the gates should leave immediately, citing unspecified “security threats.”

A source familiar with U.S. congressional briefings said U.S. officials strongly believe that the Afghan affiliate of Islamic State, known as Islamic State Khorasan (ISIS-K), after a historic name for the region, was responsible. ISIS-K is opposed by the United States and the Taliban.

Kirby said one blast occurred near the airport’s Abbey Gate and the other close to the nearby Baron Hotel. Two U.S. officials said at least one of the explosions appeared to be from a suicide bombing.

“The explosion at the Abbey Gate was the result of a complex attack that resulted in a number of US & civilian casualties,” Kirby said on Twitter.

The U.S. Embassy in Kabul described “a large explosion” and said there had been reports of gunfire.

A massive airlift of foreign nationals and their families as well as some Afghans has been under way since the day before Taliban forces captured Kabul on Aug. 15, capping a swift advance across the country as U.S. and allied troops withdrew.

The United States has been racing to carry out the airlift before its military is set to fully withdraw from the country by Aug. 31. There was no indication from the White House that Biden plans to change the Aug. 31 withdrawal target as a result of the attacks, a source familiar with the situation told Reuters.

Biden was in a meeting with security officials about the situation in Afghanistan, where the United States is in the final steps of ending its 20-year war, when the explosion was first reported, according to a person familiar with the matter.

A Western diplomat in Kabul said that areas outside the airport gates had been “incredibly crowded” again despite the latest warnings.

The United States and its allies have mounted one of the biggest air evacuations in history, bringing out about 95,700 people, including 13,400 on Wednesday, the White House said on Thursday.