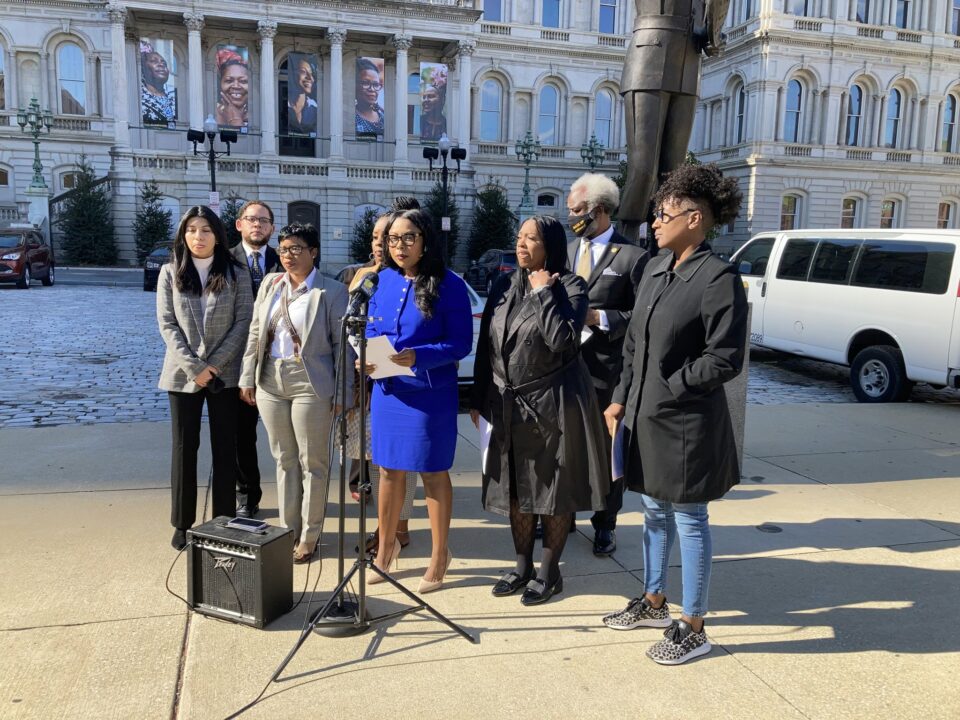 Four Black female Baltimore Police sergeants, who have filed lawsuits against the department, say they have been discriminated against, and retaliated against for speaking out. (Image: Twitter/@janders5)

The allegations include one Black female officer saying she was harassed by her peers while on maternity leave. After making a complaint against a white female officer, another female officer said the woman was passed over for a promotion and involuntarily transferred.

The four women spoke at a news conference outside City Hall last week, and all four have filed lawsuits against the Baltimore Police Department. Donna Maria Lewis, the attorney representing the four women, wondered aloud at the presser when the city’s government would begin to hold its law enforcement accountable.

The lawsuit and allegations are more bad news for a department that had to agree to a deal with the Justice Department after finding Baltimore Police routinely violated the civil rights of Black residents.

“If leaders of the Baltimore Police Department cannot get justice, cannot get respect, cannot be treated in a way that honors their civil rights, then what do the rest of us here in Baltimore have to hope for,” Kobi Little, president of the local NAACP said at the conference.

Joining the women and Lewis at the conference was Major Sabrina Tapp-Harper of the Baltimore City Sheriff’s Office, who also serves as the National Black Police Association chair.

Sgt. Danika Yampierre alleged in her suit that she was discriminated against while she oversaw the City Hall security unit, which continued while she was pregnant. The sergeant told the Baltimore Sun Black women at the department are suffering.

Baltimore has filed motions to dismiss all four lawsuits arguing, “Plaintiff rehashes, reframes, and refashions prior allegations and the continuing action thereof and now demands relief through this second lawsuit.”

Another officer, Jasmin Rowlett, said her co-workers placed rats on her desk to intimidate her, and added another officer repeatedly sexually harassed her, but her complaint was closed without investigation.

The other two women suing the Baltimore Police Department are Welai Grant and Tashawna Gaines. Grant says she was passed over for a promotion, and Gaines, who left the department, sought reinstatement to the rank of sergeant in 2017 but was denied by the commissioner at the time, despite the fact the force was understaffed.