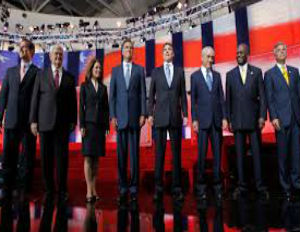 How to Watch: The debate will be broadcast on Fox Business Network and will be live streamed on FOXBusiness.com.

1. Ben Carson Will be Under a Microscope
Ben Carson faced a lot of heat last week when more information came to light that suggested that he has not been completely honest about his past. Carson has been accused ofÂ lying about his acceptance to West Point, almost stabbing a “close relative“ in a heated fit of anger, and sheltering fellow classmatesÂ during a race riot, among other things. Carson voiced his distress over the increased media attention on Meet the Press, telling Chris Jansing that he had “not seen that with anyone else.”

His comments were quickly seized upon by rival candidates, and it was questioned whether Carson will be able to handle the scrutiny he will receive if elected president. Expect to see Carson fielding questions of this nature, and a continuation of the conversation regarding his trustworthiness.

2. Will Rubio remain the GOP’s new golden boy?
The last debate went extremely well for Marco Rubio, earning him third place in the polls, with a solid 12% He’s also been enjoying a sharp uptick in his fundraising efforts, as well as multiple high-profile endorsements.

Due to his new status as the establishment favorite, Rubio is expected to come under intense fire from his rival candidates tonight. Due to the nature of this debate, you can expect to see Rubio face questions regarding his personal finances, as well as his alleged inappropriate use of Republican Party funds. Rubio managed to pivot to policy issues when confronted with similar questions in previous debates, but don’t be surprised if other candidates, primarily those who are worried about their standing in the polls, jump on this line of questioning to gang up on Rubio.

3. Fox Business News vs. CNBC
As BlackEnterprise.com previously reported, the GOP candidates were not happy with CNBC’s handling of the last GOP debate. If their debate promo serves as any indication, Fox Business News clearly agrees with the candidates’ assessment. The promo script reads:

“CNBC never asked the real questions, never covered the real issues. That’s why on November 10, the real debate about our economy and our future is only on Fox Business Network.â€

When asked what a moderator’s role should be, FBN’s Global Markets EditorÂ Maria BartiromoÂ told the Washington Post, “I think you have to challenge. You have to know your content cold, so that you can say, “Well, that’s not true.â€ And you want to be able to do that on the spot so that the moment doesn’t leave you.” This was clearly aimed at CNBC debate moderator, Becky Quick, who needed an entire commercial break to figure out that the source of one of her questions came straight from a candidate’s campaign website.

FBN’s Managing Editor of Business News Neil Cavuto warned candidates that while they could expect a more relevant, policy-based line of questioning, they would also be expected to follow the rules.

“I understand candidates getting annoyed, but they better be careful about looking like whiners and babies.”