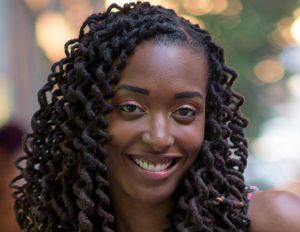 Youtube vlogger Franchesca Ramsey, also known as Chescaleigh, is shifting platforms to host an MTV web series that will take on racism and culture titled “Decoded,” according to MTV.

The series is set to air every Wednesday and will include sketches that tackle topics like stereotypes and other aspects of race via comedy.

The talented Ramsey is a writer, actress, graphic designer, natural hair guru, and vlogger. She’s best known for her comedic sketch “Shit White Girls Say to Black Girlsâ€ that went viral on YouTube in 2012 and, subsequently, became her social commentary debut. Since then, her’s opinion on race-related topics have been featured on CNN, MSNBC, and in the Huffington Post.

In the first episode of MTV’s “Decoded,” Ramsey confronts the age-old stereotype that black people are more partial to fried chicken and watermelon than other races. Ramsey asks, “Why do alarm bells go off whenever people talk about how black people just love fried chicken and watermelon?â€ In the video, she goes on to break down why African Americans find the food allegations so offensive, and even gives a mini history lesson that explains the origin of the stereotype.

To hear more of what Chescaleigh has to say, look out for “Decoded” on Â Wednesdays.

[Below: Check out her first episode]