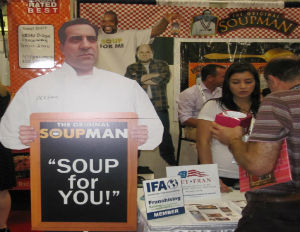 BlackEnterprise.com is putting the spotlight on less obvious franchise opportunities showcased at the expo that may have potential.

The Original Soupman has been a landmark venue for quality soup in New York since 1984. A feature on an episode of “Seinfeld” made the line “No soup for you” a staple in pop culture, and the brand name world famous. Now the brand is taking its show on the road.

Food trucks are one of the culinary world’s hottest new trends and a fast-growing franchise opportunity. The industry generated more than one billion dollars in revenue between 2007 and 2013.

The soup market is also a winning food category. With billions of dollars in grocery and restaurant sales, you can get soup as a daily special at diners across the country.

Here are seven reasons why this franchise concept could have traction.

New Yorkers and tourists have embraced this brand of soup as one of the best tasting in the world even before the Seinfeld episode.

Franchisee Marcus Crawford, says the brand is working to bridge the gap with people who are unfamiliar with the popularization of the product. He says, “We know that food trucks are really hot now. Why not take our dynamic product, put it on a truck, and start reaching a bigger base?

Shaquille O’Neal is a big believer in this product and has been pushing it hard. In a statement to Blackenterprise.com he says, “The brand is a winner! We have an undeniable product in the soups and a strong supporting staff in the trenches moving the brand forward. The SoupMan lobster Bisque is my favorite with its huge chunks of real lobster meat! Wow!â€