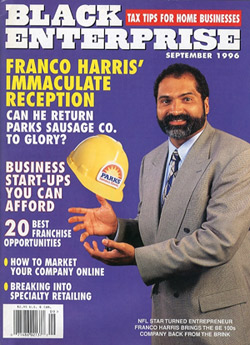 As the featured running back for the Pittsburgh Steelers in the 1970s and 80s, Franco Harris helped his team win four Super Bowl championships and gained 12,120 yards and nine Pro Bowl appearances in his storied 13-year career. But as his former team makes final preparations to square off against the Green Bay in Super Bowl XLV this Sunday, the NFL legend is working towards continued success in a more important game–entrepreneurship.

Harris (who graced the cover of our September 1996 issue) is one of the relatively few professional athletes to successfully transition into business. In the late 90s, he and his partners purchased and later sold Parks Sausage Co., a company that had ranked among the BE 100s at that time. Now he’s launched SilverSport, a line of fitness products that feature an advanced nanotechnology that makes the towels, mats, roller/shaper and prenatal fitness kit antimicrobial–basically they offer permanent protection from odor-causing bacteria. The products are currently sold exclusively at Dick’s Sporting Goods and Harris expects other major retailers to carry the product line by this spring.

BLACKENTERPRISE.COM caught up with the Hall of Famer and serial entrepreneur to talk about life and succeeding in business after football.

Your new venture SilverSport combines tech and sports. How did you get into this particular business?

People right now are very concerned about bacteria, especially staph MRCA, especially in the fitness and sports worlds, so my partner and I launched the line this September and there’s been a very good reaction to it. A lot of people didn’t know that silver has been used for centuries to treat wounds and protect against bacteria. So we brought some old knowledge back in a new way and put it in to the fitness and sports world. We’re very excited about it.

All the products are made in the US. What was the rationale behind not manufacturing overseas to keep costs down?

We felt we could work with American manufacturers and still be competitive. Our goal is to bring manufacturing back to America and work it in a way where we can be competitive and at the same time have quality products that offer the benefits that people want.

After sports you transitioned into business success–something most athletes fail to do. What advice would you give others who want to follow in your footsteps?

Once you’re starting out, don’t concern yourself where you start out. Learn the business from the ground up–don’t just buy your way to the presidency. If you put in the same hard work, focus and determination, you’ll be successful. The transition can be very tough and people sometimes expect big things right away and a lot of times that’s not the case, but don’t worry about it. Do what you have to do–whether it’s picking up boxes and delivering. Look at the competition and the market. Figure out how to bring your product to market and what needs to be done to grow it.

What advice do you give athletes or anyone who makes a lot of money at an early age and then faces retirement while still a relatively young person? So many end up financially strapped.

That is disturbing. I tell ballplayers while they’re playing, don’t worry about doing business. I tell them not to co-sign anything because you’ll be the one left holding the bag. I tell them to be very careful about business and if you can wait until you’re finished playing. If they put away the money they make and save it, you’ll have so many options when you’re done that it’ll give you the freedom to learn the business, be involved in it and be there on a day-to-day basis. It gives them the time to look around and hopefully find their next passion.

What was the biggest mistake you made in business and what did you learn from it?

There were some businesses that people say get involved in and that you’ll make money out of it and you find out that you never did. Fortunately, I didn’t have big money to lose big money. One thing I made sure when I retired was that I had no debt. I paid in cash so when I retired, I didn’t have extraordinary bills and it made transition a lot easier. Never co-sign and always just give what you can afford to lose.

Be sure to read these sports-related articles…