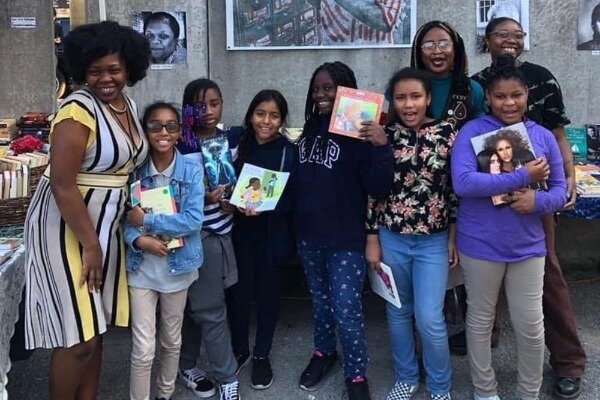 The creator of the traveling Free Black Women’s Library is on her way to opening her first official brick-and-mortar location after receiving over $100K through a GoFundMe campaign.

OlaRonke Akinmowo started the library as a social project back in 2015, Oprah Daily reports. The Brooklyn native would carry around 100 books by Black female authors to the front stoop of a building and get community members to trade their books in for one written by a Black woman. Following the pop-up’s success, Akinmowo aspired to one day open up an official branch while also keeping the business running on wheels.

After six years of traveling to cities like Detroit, Philadelphia, North Carolina, and Baltimore, Akinmowo’s dream was fulfilled through the $100K she raised in just two months. “I was humbled and blown away and surprised,” she told NBC News. “I was feeling really affirmed, like, ‘People really believe in this project and think it’s a good idea!’ I want to make people proud. The fact that I was able to raise it in such a short amount of time is something I’m super grateful for.”

Her expansion plans now include finding the perfect location to open her Brooklyn branch and purchasing a van or truck for the library’s traveling “Bookmobile.” “I’ve always wanted to figure out a way to have a space where the library can live full-time, and I’ve always wanted to have a bookmobile,” she shared. “I am hoping this will be a fully-funded cultural institution with staff, that people can use in the same way that they would use any public library. I’m hoping that it will serve as a powerful resource in the community.”

Akinmowo came up with the idea after growing tired of organizing police brutality protests. In an effort to serve her community, she used the traveling library to create a space where people of all backgrounds could come together for the love of books.

“This is important to me because, still, in 2021, Black women are minimized, objectified, erased, harassed, criminalized, threatened, and made to feel like we’re less-than,” she said. “Part of what the library does is, in addition to showing how amazing we are, it shows how human we are. It shows us as human beings who are worthy of space, daydreaming, and vulnerability.”