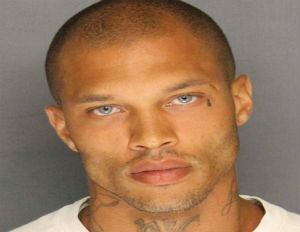 What a way to get discovered. Can a mug shot really land someone a lucrative modeling contract and a reality TV series?

Jeremy Meeks, the guy whose mug shot went viral when it was posted on the Web may be on lockdown but he could have a modelling career when he walks out of prison.

Meeks was arrested on weapons charges in California, but it hasn’t stopped girls and guys from going ga-ga over his “headshot.” His arrest photo scored tens of thousands of likes on Facebook and more than 4,000 shares. Some people even started a Twitter campaign to “Free Jeremy.” The Stockton Police Department says no other mug shot has garnered so much positive attention.

TMZ reported earlier that Blaze Modelz, had signed Meeks to a $30,000 modeling contract, but a company spokesperson is denying this telling Blackenterprise.com “We have had no communications and there is no contract” with Meeks.

However, Meeks has hired GR Media to manage his career, represent his interests and handle requests from the media. Gina Rodriguez, founder of the company says, “It’s been very positive so far. We are currently in talks with photographer Jim Jordan with White Cross Production.”

Rodriguez says they have been in talks with several production companies looking to create a reality series about Meeks’ life where a camera will follow him around.

But he’ll have to get out of jail first, Meeks’ next court date is July 8.