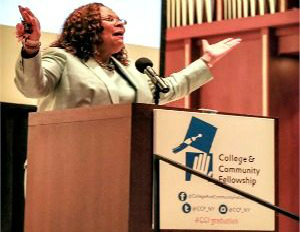 Considering female and youth incarceration is on the rise, BlackEnterprise.com caught up with Nixon for some tips for reducing recidivism.

BlackEnterprise.com: When it comes to bouncing back after prison, what have been the key components of building your career, and how have those factors helped you carve your own path to success?

Nixon: It’s hard to imagine a more dehumanizing place than prison. Instead of setting up a system that teaches individuals to critically think about mistakes they have made and prepare them for release, it often leaves individuals feeling defeated and cast out of society.

I was very lucky to have the support of my family when I was released from prison in 2001, a privilege many women do not have. This meant I had a roof over my head while I worried about what came next. I always tell people that the first call I made when I left prison was to my parole officer, the second was to CCF.

Education and CCF helped me turn my life around by teaching me that I am so much more than the sum of my past mistakes. Finishing my higher education gave me the self-confidence I needed to restart my life in a way that I could be proud of, and it is that reason I have worked so hard to keep CCF funded. I want every woman leaving prison to be able to go back to school and have those same benefits. Women with criminal justice histories need the same level of individual support that I had to be able to re-imagine and transform their lives, and to revisit the dreams they had before prison. No one dreams of being called by a number instead of their name.

According to research, 2.4 million people in prison across the country, 38% of federal prisoners are millennial, and over 50% of inmates in state prisons are between the ages of 20 and 30, how can family members of incarcerated youth help reduce recidivism?

Privilege is such a huge factor when it comes to who our justice system incarcerates and who gets a free pass. So many of our brothers and sisters in prison come from lower socio-economic backgrounds, without access to education or role models for a life outside of crime. Increased access to higher education does not only act as a ladder to pull the individual out of poverty and the criminal justice system, but it also is proven to help break the cycle for the individual’s family and community as well.

Families can help their loved ones who are returning home from prison by giving them care and support as they rebuild their lives. Reentering individuals suffer incredible pain and the stigma of their incarceration follows them everywhere they go. By creating safe and encouraging spaces for justice-involved family members, families can help their loved ones gain the skills to be full members of society.

We want engaged members of society in this country, and without access to the vital critical thinking tools and opportunities education provides, it is no wonder roughly 67% of people in this country return to prison within three years of release. I’m happy to tell you that at CCF, after 16 years of operations, less than 2% of our students have returned to prison.