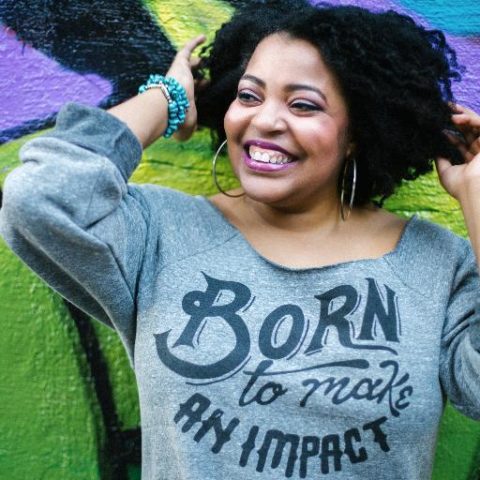 LC Johnson chuckles whenever she thinks about the origins of her newest business venture.

The 29-year old blogger-turned-entrepreneur, wife, and new mom jokes that it all started with wine and Netflix.

“I moved to Columbus in 2015 and I had a hard time making friends. As an adult woman moving to a new place, I had no idea where to meet women I could drink wine and binge Netflix with one day, and brainstorm my business plan with the next.

“I kept looking for places I could go to meet other women of color, other than church and the beauty salon; places where I could hang out but also get work done.”

Eventually, Johnson realized that what she was looking for didn’t exist, and the idea for Zora’s House was born. Located in Columbus, Ohio, Zora’s House will cater specifically to women of color, which Johnson touts as a first.

Johnson, who majored in Women’s Studies at Duke University, cites the enduring strength of the black women’s club movement—exemplified by sororities and historic organizations like The National Council of Negro Women—as her inspiration for creating a space for black women entrepreneurs.

But her outlook regarding Zora’s House is firmly planted in the here and now, as well as the future.

“Women of color will be the majority of women by 2050, but many communities still haven’t figured out how to adequately support us,” Johnson says. “Programs geared toward ‘people of color’ often ignore the nuanced experiences of women of color, and programs for ‘women’ tend to be centered around whiteness.”

As some began using the terms co-working and bro-working interchangeably, a wave of female-focused spaces opened, from The Riveter in Seattle to RISE Collaborative in St. Louis and The Wing in New York. Each has their own comfy-couch, pink-power, boss-woman vibe, and strong Wi-Fi. Slated to open in spring 2018, Zora’s House will have all of that too.

Young Black Women Entrepreneurs on the Rise, but Cash-strapped

While the trend of black women entrepreneurs starting businesses at stunning rates is not new, Johnson is part of a generation of high-achieving, ambitious women of color opting out of traditional work environments in their early-to-mid 20s. They are choosing to bet on themselves early rather than a corporate world where they believe the dual challenges of racism and sexism will limit their ability to advance. But trouble finding adequate funding threatens to stymie these women’s entrepreneurial progress as well.

“One of my main issues has definitely been getting the funding to open a physical space,” says Johnson, who has maintained a full-time job since coming up with the Zora’s House concept and anticipates continuing to work full time once the space opens out of financial necessity.

Johnson isn’t alone in her struggles. Despite being the most educated and enterprising group in the U.S., black women entrepreneurs receive less than 1% of VC funding. And outside of the tech space, entrepreneurs like Johnson face similar challenges acquiring loans and grants for high-potential small businesses.

Funders who Johnson has approached so far, most of whom have been white men, have blatantly admitted to “not knowing the market for something like this” and been unwilling to invest.

“It’s frustrating,” says Johnson. “They don’t know the market, because they don’t care about the market.” So she launched a crowdfunding campaign. Her appeal to friends spoke directly to a larger issue. “I told them, people are watching me. People are watching us, waiting to see if products, experiences, and spaces centered around women of color are necessary, desired, and ‘fundable’ in our world today.”

Johnson, who serves as the director of Leadership and Social Justice Programs at her local YWCA, insists it’s not just a money issue. It’s a social justice issue.

“When we don’t fund black women-owned businesses, not only are we saying their ideas and desires are not good enough, but we are stunting their economic growth and keeping black women from making their full contributions to society,” she says.

Johnson’s goal is to eventually establish Zora’s Houses in communities across the country. The first is slated to open in early spring, 2018. Having raised more than $10,000 of her $15,000 crowdfunding goal, Johnson hopes to raise the remaining $5,000 in the last 48 hours of her campaign. The clock for Zora’s House, and entrepreneurs like Johnson, is ticking.