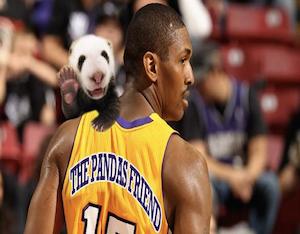 You never know what to expect from the dastardly, brilliant mind of Ron Artest. Yes, we’re calling him that since that’s what his mama named him, even though he changed it to Metta World Peace in September 2011.

The former Los Angeles Laker will play basketball in China beginning next year, and with the move comes, you guessed it, a new name. From here on, everyone (including us) will have to refer to Metta World Peace as The Pandas Friend while he balls out for the Sichuan Blue Whales this coming season.

The name change was confirmed by the 34-year-old power forward via his Twitter page on Thursday (Aug. 7) and has already been updated on his Wikipedia page. After reaching an agreement to play for China’s hoop squad, the temperamental talent foreshadowed his own change by tweeting, “The first thing I am doing when I get to China will be visiting pandas with my daughter @BabyGirl_Sade.” Seemingly excited to start this new chapter in his life, the ex-Knicks player will be the highest-paid foreign playing in the CBA, making $1.43 million playing for the Blue Whales.

For all the laughs and remarks Twitter has slung Metta’s way, his heart may be in the right place as giant pandas are on the list of endangered species, particularly in Sichuan province, where World Peace will be playing. What we don’t know is if Metta World Peace will be making this name change permanent like he did in 2011 – or is this just a nickname he’ll aim to go by while on the court!

Whatever the inspiration behind Ron Artest’s name change, Twitter has already caught wind and begun to share collective thoughts in real-time. We spotlight some of the funniest ones for you to check out in our slideshow below. Enjoy!