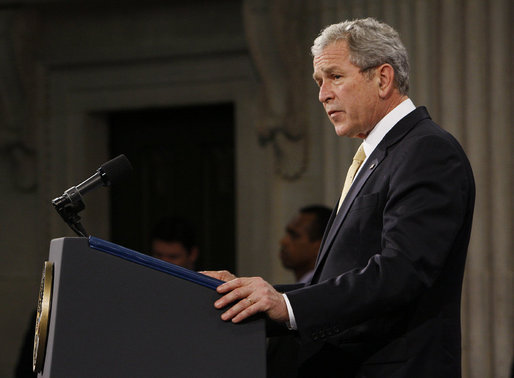 The leaders of nations representing nearly 90% of the global economy are meeting in Washington today to discuss ways to tackle the financial crisis. Although President-elect Barack Obama and Vice President-elect Joe Biden will not be in attendance, the former Secretary of State Madeleine Albright and former Congressman Jim Leach (R-IA) will be available to meet with delegations at the G20 summit on their behalf.

Leach and Albright are holding unofficial meetings to seek input from visiting delegations on behalf of Obama and Biden and will brief them after the meeting.

“The leaders attending this weekend’s meeting agree on a clear purpose — to address the current crisis, and to lay the foundation for reforms that will help prevent a similar crisis in the future,â€ President George W. Bush said in his address to the Manhattan Institute on Thursday.

Representatives from the International Monetary Fund, the World Bank, the United Nations, and the Financial Stability Forum will be in attendance at the two-day long summit to discuss financial markets and the world economy.

The summit will focus on five key objectives: understanding the causes of the global crisis, reviewing the effectiveness of responses thus far, developing principles for reforming financial and regulatory systems, launching a specific action plan to implement those principles, and reaffirming a conviction in free market principles.

Dan Price, the assistant to the president for international economic affairs and Under Secretary of the Treasury Department, Dave McCormick, said in a press briefing this afternoon that the group will likely discuss efforts to provide much needed liquidity in trade finance to many of the emerging markets and availability of needed resources within the IMF, the World Bank, and the regional development banks. Actions taken by the Federal Reserve and the IMF with currency swaps will be ripe for discussion, said McCormick.

In terms of principles, Price determined that the discussion will focus around four principles: first, strengthening transparency and accountability; second, enhancing sound regulation by improving regulatory regimes, credential oversight, and risk management; third, promoting integrity in financial markets; and fourth, reinforcing international cooperation both at the level of national regulators and laws, but also, importantly, through reform of international financial institutions.

“To ensure that these principles are implemented, we expect that leaders will want to come to an agreement on an action plan identifying specific implementation measures,â€ says Price.

Since September, the Treasury Department has been looking for ways to distribute the $700 billion bailout. The government has taken steps to boost liquidity, recapitalize financial institutions, and guarantee new debt issued by banks. Similarly, governments in Europe and Asia have been purchasing equity in banks, providing governmental loans, lowering interest rates, and launching economic stimulus plans in order to jump-start stalled credit markets worldwide.