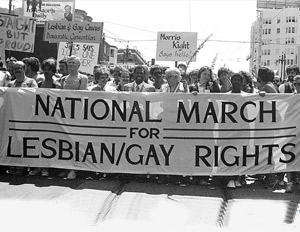 As the discussion over gay rights continues, so, too, does the debate as to whether the gay rights issue is a civil rights issue, namely one that some say is reflective of the black civil rights movement. In the upcoming film, TheÂ New Black, filmmaker Yoruba Richen explores the histories of the African American and LGBT civil rights movements. “The film specifically looks at homophobia in the Black church, and how the Christian right has exploited this phenomenon that exists in order to promote an anti-gay political agenda,â€ says Richen. Her project is demonstrative of how the parallels and distinctions between the African American and gay rights movements are complex and multi-layered.

“As both of these movements have reached maturation we have multiple generations working for civil rights,â€ says J. Bob Alotta, executive director of the Astraea Lesbian Foundation for Justice. “Right now you would be talking about grandchildren and children of civil rights activists. Our elders were Black Panthers and marching with [Martin Luther King Jr]. Not only have we learned from them, but when we start talking about identity politics it’s apparent that many of us embody multiple identities.â€

Black and gay activists have always played a formidable role in the civil rights movement, but weren’t necessarily widely accepted. “We have progressively gotten to a place where people could voice desires,â€ says Herb Green, who teaches early African American literature in the English department at the City College of San Francisco. Green is also on faculty in the school’s Lesbian Gay Bisexual and Transgendered [LGBT] Studies Department. “With the turn of the century things are shifting quickly as technology and modernism changes the social dynamic,â€ he says. “People have access to more information.â€