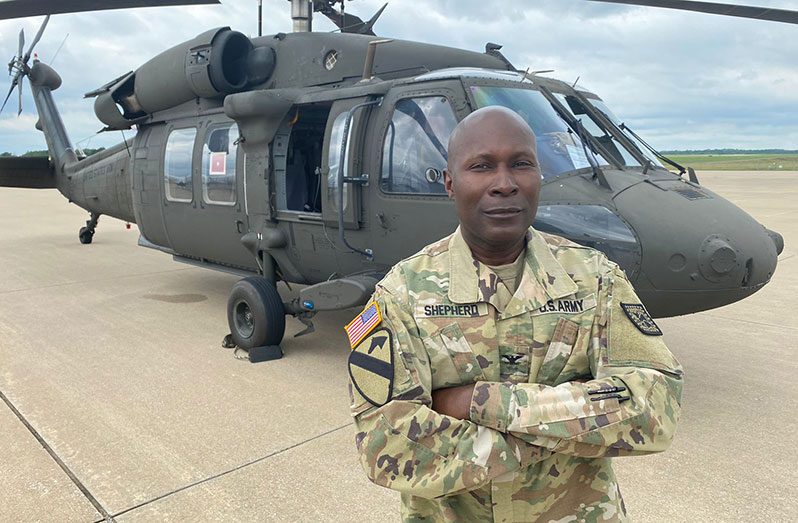 Guyana-born Brigadier-General Leland Tony Shepherd made history this month when he became the first Black man to command the Arkansas Army National Guard.

He is the second Black general officer in the Arkansas Army National Guard after Brig. Gen. William J. Johnson, who was promoted on Oct. 16, 2007, and retired in 2012.

“This may be one small step, another step of promoting an officer to the rank of general, but it is a giant leap for African Americans across the state, across the nation and across this world,” Shepherd said during his promotion ceremony at Camp Robinson in North Little Rock.

Maj. Gen. Kendall W. Penn highlighted the promoted general’s uniform, crediting it as a representation of the “fantastic job” Shepherd has done in every position he has ever held. The two met before deployment to Iraq in the early 2000s.

“Tony has shown that capability as long as I’ve known him,” Penn said. “Tony was able to do things with radios, computers and wiring that nobody else in the brigade could do.”

Shepherd grew up in Guyana. From the age of four, he expressed interest in serving in the military, the Guyana Chronicle reports. His family recalled how fascinated a young Shepherd was with the Guyana Defence Force (GDF) parades that his uncle, Ivor Shepherd, took him to.

“This is an American story,” Shepherd said. “Where a young private dreamt the dream of getting to the top.”

He also included a comical quote from rapper Drake telling the crowd, “Starting from the bottom, now we here.”

He has received numerous medals, including the Legion of Merit, the Bronze Star, the Meritorious Service Medal with two Oak Leaf Clusters, the Army Commendation Medal, the Army Achievement Medal, the National Defense Service Medal, and the Iraqi Freedom Service Medal. He’s also been awarded the Combat Action Badge and the Order of the Mercury, Bronze.