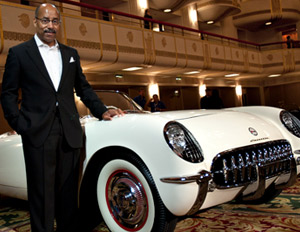 Welburn with a 1953 Corvette

Speaking of customers, GM has recorded several profitable quarters since emerging from bankruptcy and vehicle demand has been coming back. But do you think the high volumes we’ve seen in the past will ever return? And if so, what do you think needs to happen before you start seeing those numbers again?

I’m a car designer and I cannot tell you exactly what those numbers will be, but those numbers will come but maybe not in the same locations that they were in the past. The world is changing in many ways and as you said earlier, we sell as many if not more cars outside the United States as we do inside. The market in China is growing at a significant rate and continues to grow. There will be growth in other areas around the world, as well, as those markets develop and change in significant ways. And I believe the real intensive push on new product and different product and different vehicle types and more fuel-efficient vehicles will really appeal to an awful lot of people and sales will be very strong.

Do you think African-American representation in your field is where it should be and if not, what can be done to see more Ed Welburns out there?

Would I like to see more African Americans in design? Yeah, I’d like to see more guys who are crazy about cars in this field. The number of African-Americans in General Motors design is lower than the percentage nationally, but the African-Americans that we have at General Motors are in significant leadership positions developing absolutely dynamite cars and I could not be more proud of the work they do. Today, there are select few schools that have a major in car design. And most of our designers come from those schools where they have a real concentration on that subject. When they’re hired here, they are ready to be put on significant projects, day one. We do still hire people who are graduates from schools of fine arts and that type thing, but it’s a bit more of a challenge.

So, when I visit the schools of design, the big significant schools of design have a real area of focus on automobile design or major in automobile design, I don’t see many African Americans. I have talked to the presidents of a couple of the schools and they know that I would like to see more African-Americans in design at General Motors. The feeder system doesn’t have any and we are working together to improve that feeder system. We’re working together on that. That’s the only way it will happen, is that if I work with the universities. And so we now have programs in place to help identify young people in public schools. You can’t start your senior year in high school and it’s very difficult at that point. So we have to go down deeper than that. So it is a long-term commitment. And we don’t make big public announcements about it, press conferences about what we’re doing. We’re just doing it. We’re just quietly doing it. And it’s starting to show some benefit. They’re people in the pipeline now.