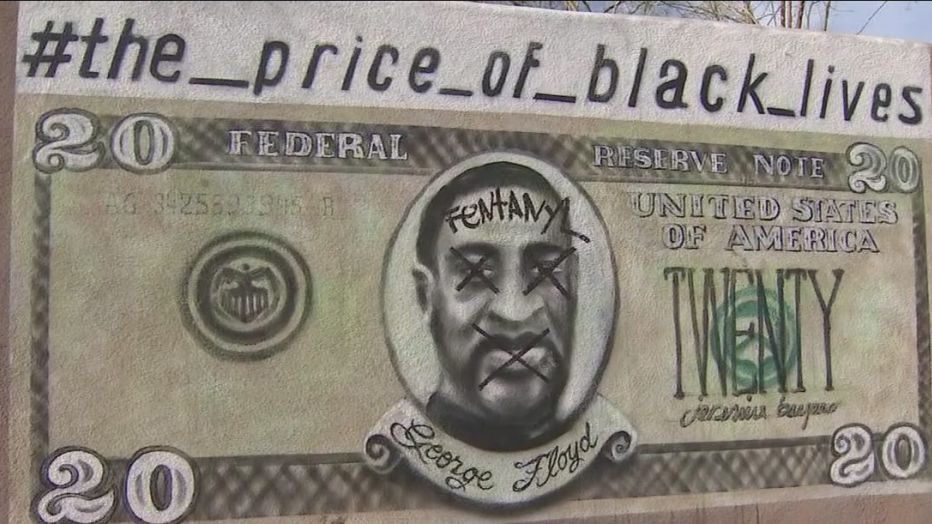 A George Floyd mural in Pheonix, Arizona, was vandalized with the word “Fentanyl” amid the current Derek Chauvin trial over Floyd’s death.

Since the trial began on Monday, prosecutors have brought forth evidence of Floyd’s activity and behavior leading up to Chauvin’s killing of Floyd. Chauvin’s defense attorney Eric Nelson hasn’t used the disturbing video that shows the former Minnesota police officer kneeling on Floyd’s neck for over eight minutes. Instead, Nelson has focused on Floyd’s existing health issues and his drug use, USA Today reports.

As the prosecutors continue to use the drug use narrative against Floyd, vandals in Pheonix have acted out on them by spray painting the word “Fentanyl” across a mural of the deceased father, Fox News reports. The mural that initially showed Floyd as the face on a $20 bill, now shows Floyd with the drug name scrawled across his forehead and his eyes and mouth crossed out.

The mural was created last year by NYC artist Jeremie Bacpac Franko. It was meant to symbolize the $20 counterfeit bill Floyd was accused of using ahead of his death.

“The reason why I’m doing a $20 bill is because George Floyd was killed over a $20 bill,” Franko told Fox News. “We may never know if it was or wasn’t counterfeit,” said Franko.

The store clerk who was servicing Floyd prior to his death took the stand on Wednesday and admitted to taking the fake $20 bill and offering to pay for Floyd’s cigarettes, NPR reports. “I thought that George didn’t really know that it was a fake bill,” Christopher Martin said during his testimony. “So I thought I’d be doing him a favor.”

The cops were called after Martin told his manager about the situation and Floyd refused to return to the store to speak with the store manager. However, no one expected Floyd to lose his life as a result of the police interference. Cellphone footage of Floyd’s May 25, 2020 murder led to nationwide protests and worldwide attention on the Black Lives Matter movement.