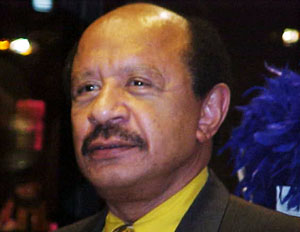 According to TMZ, Sherman Hemsley, the actor known by many as George Jefferson from the hit television series The Jeffersons, has died. He was 74.

Authorities in El Paso, Texas have confirmed his death, which occurred earlier today.

He reportedly died of natural causes. He had no wife or kids.

Hemsley became famous for his appearances on All In The Family and the later spin-off, The Jeffersons, where he starred as George Jefferson, a dry cleaning entrepreneur and husband of popular character, Louise “Weezy” Jefferson.

Hemsley was also part of the cast of NBC’s Amen, playing character Ernest Frye, an a church deacon very similar to the George Jefferson character. He was a voice actor in the ABC live-action puppet series Dinosaurs, where he played Bradley P. Richfield, main character Earl’s boss. The show ran for five seasons, ending in 1994.

He’d go on to have recurring roles on The Fresh Prince of Bel-Air, commercials for The Gap, Old Navy and Denny’s, and he also made appearances at dry cleaning conventions.

We will update you as more details become available.