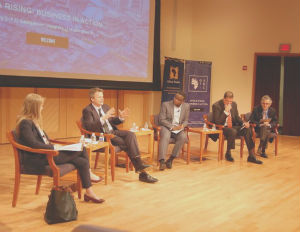 “The purpose of this event is to showcase the growth and impact of the private sector across the African continent and facilitate a discussion on opportunities to continue this success,â€ wrote event organizers.

The conference featured six panels discussing issues including financial and business opportunities, cultural shifts and technological advancements, and more than 20 executives and leaders of the African diaspora from companies and organizations including Coca-Cola, World Bank, Atlas Mara, Abraaj, Emerging Capital Partners, IHS Towers, Standard Bank, and Okayafrica participated. Check out updates from the event below:

“The darkest thing about Africa has always been our ignorance of it.” #gtabc #africa

The emerging #urban consumer opportunity is huge—over 30% of Africans will become part of the middle class by 2020: Tom Speechley #GTABC

The PE panel organized by #GTABC has offered great insights on investing in #Africa, and the new drivers of growth pic.twitter.com/XZbk4FqU4E

“10 countries in #Africa account for an estimated 80% of the continent’s private consumptionâ€ Tom Speechley #GTABC pic.twitter.com/pBOfnV7q41