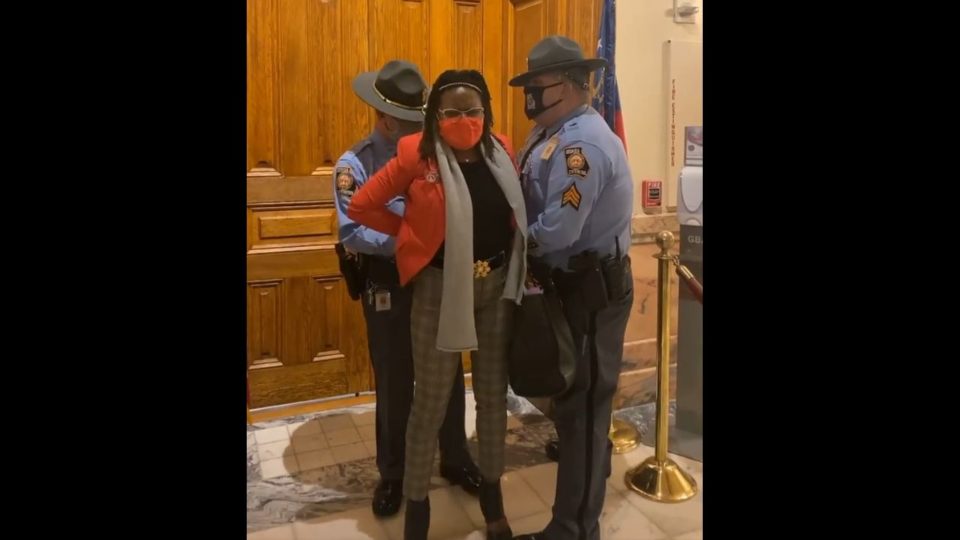 A Black Democratic state representative was arrested after knocking on the door of a Republican governor as he was signing a controversial bill on Thursday.

Tamara Stevens posted the incident as it happened on her Facebook page:

According to NBC News, Democratic state Rep. Park Cannon was arrested by Georgia state troopers on Thursday after she was seen knocking on the door to Republican Gov. Brian Kemp’s statehouse office. The governor was inside signing a controversial elections bill into law in a closed-door ceremony.

Although she identified herself as a legislator, she was forcibly removed and arrested by police officers against the protests of people who were witnessing the incident.

Hey everyone, thank you for your support. I’ve been released from jail. I am not the first Georgian to be arrested for fighting voter suppression. I’d love to say I’m the last, but we know that isn’t true. #SB202

But someday soon that last person will step out of jail for the last time and breathe a first breath knowing that no one will be jailed again for fighting for the right to vote. #SB202

As you know by now, earlier today I was arrested outside Gov. Kemp’s office door as he signed #SB202https://t.co/RX6cc2NGjN

#SB202 restricts many methods of voting. These restrictions serve no purpose other than to keep voters from exercising their constitutional right to vote. https://t.co/26zXWSBC2x

Who — and what — are they protecting when they work this hard to suppress our vote? #SB202

According to The Atlanta Journal-Constitution, Tamara Stevens, who was with Cannon, said, “She knew he was signing a bill that would affect all Georgians—why would he hide behind closed doors? This isn’t a monarchy,” Stevens said. “You have a woman of color fighting for the rights of Georgians and they arrested her for knocking on the door because she wanted to witness our governor sign the bill.”