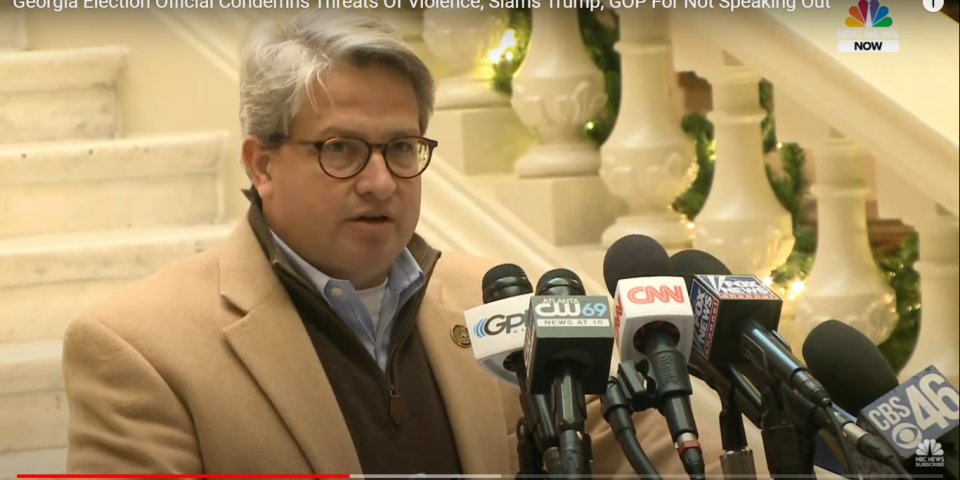 A top Georgia election official berated President Trump and other Republicans who have attacked the state’s election system in a press conference on Dec. 1.

Gabriel Sterling, who works with Georgia’s Secretary of State Brad Raffensperger, blasted Trump and state senators Kelly Loeffler and David Perdue. A visibly angry Sterling held the press conference from the state’s capitol and pushed for Trump to accept his election loss in the state of Georgia, where the president’s false claims of voter fraud “has all gone too far.” He added that rhetoric claiming the election was rigged “has to stop.”

“Mr. President, it looks like you likely lost the state of Georgia. We’re investigating, there’s always a possibility, I get it, you have the right to go through the courts,” Sterling told reporters Tuesday.

Sterling, a Republican, added that he has had police protection outside his home for several days and Raffensperger’s wife has received “sexualized threats” to her cell phone. However, it was the news that a contractor with Dominion Voting Systems has been receiving death threats and was targeted with a noose that set him off.

Trump and his supporters have been targeting Dominion, a voting software company, whose equipment is used in more than 20 states. According to multiple lawsuits, the Trump campaign has filed, Dominion’s systems deleted and switched votes in Georgia that were intended for Trump.

Dominion responded saying it “categorically denies any claims about any vote switching or alleged software issues with our voting systems.” Multiple federal agencies also backed up Dominion’s claims including Chris Krebs, the former Director of Cybersecurity and Infrastructure Security Agency and Attorney General Bill Barr, who said there was no evidence of widespread election fraud.

Georgia Senators Loeffler and Perdue also called for Raffensperger to resign a day after it was projected that Democratic nominee Joe Biden would win the state, saying he failed to deliver an honest and transparent election despite having no evidence to support their claims.

“There have been too many failures in Georgia elections this year and the most recent election has shined a national light on the problems,” Loeffler and Perdue said in a joint statement. “The Secretary of State has failed to deliver honest and transparent elections. He has failed the people of Georgia, and he should step down immediately.”

Sterling continued to attack the outgoing President and both senators at his press conference, calling them out for failing to condemn the actions of their supporters.

“We need you to step up,” Sterling said. “If you’re going to take a position of leadership, show some.”