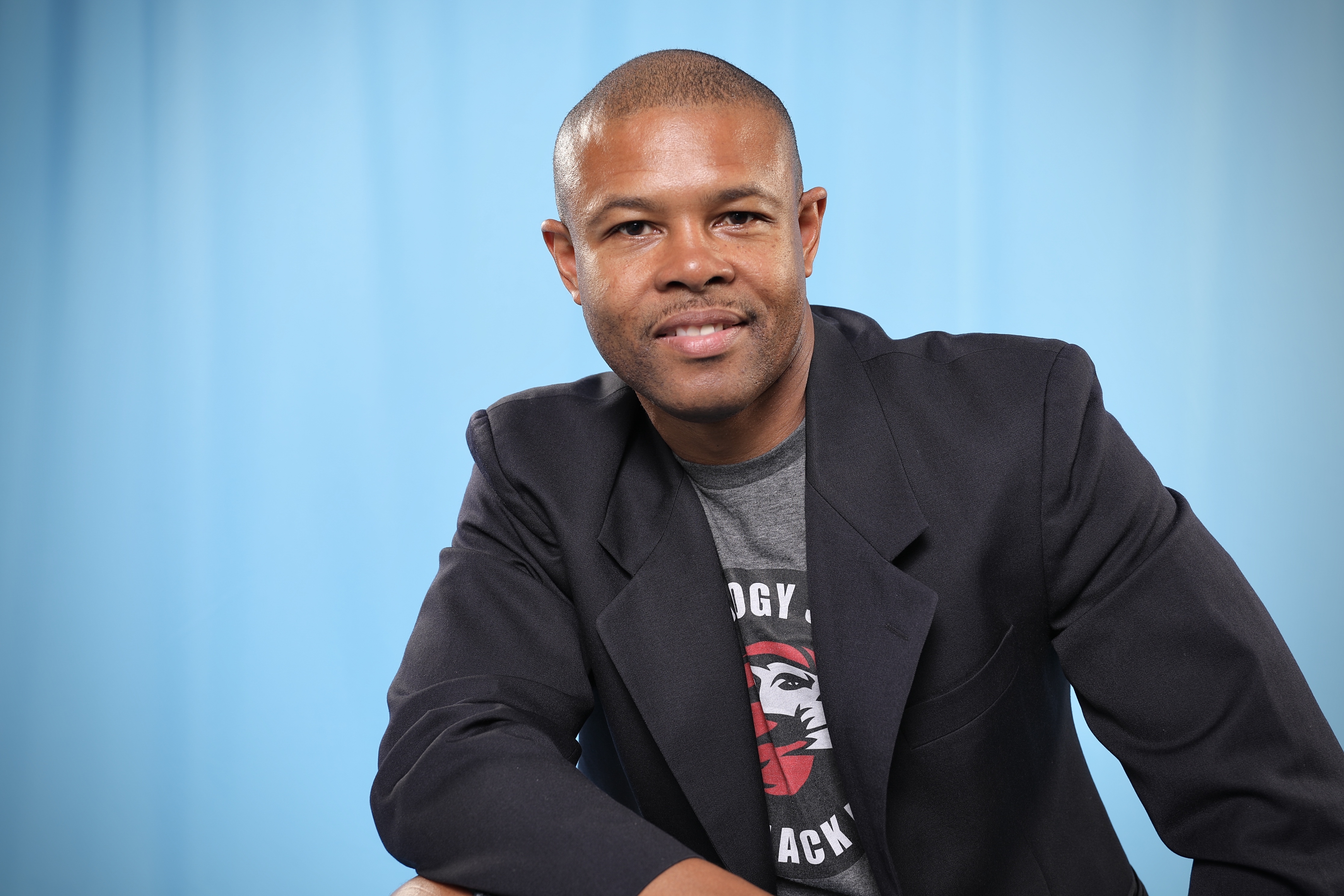 My latest startup is the Gerald Moore Online Technology School for Black Boys. I have a goal of educating 10,000 young black men and boys ages 8-16 per year online. The school’s primary focus will be preparing black boys for STEM professions, by teaching computer science, coding, mobile app development, and website development. I also have a background in basic electricity which I will also be including. Registration includes the Black Boys Read Book Club. I’ve also just published my book, Motivate Black Boys, How to Prepare Your Sons for Careers in STEM.

I’m a cybersecurity engineer and in this line of work, or any of the engineering sciences, black men are not very well represented. In my 20 year career, I’m typically the only black man in the room. I have not seen much growth in black male representation over that time, but I have seen the tremendous growth of black women in engineering and information technology. This is why my personal focus is on preparing black boys and young men for success in STEM.

Coaching youth sports is another way I am preparing black boys for success. I have been fortunate over the years to have many of my players go on to get degrees in the STEM fields. Many of them have stated to me that I introduced them to how even in sports, higher-level math and science were involved in how we play the game. If you’ve ever played for me, you have a clear understanding of what an engineer is, and he’s not some nerd who can’t play ball and doesn’t listen to hip-hop.

I have helped young black men at this point earn well over a million dollars in athletic scholarships and I’m very proud that most of them graduate and understand the importance of giving back to their communities.

What I am most proud of in life is that I have become a man that is respected in my community and a father that is revered by my children.

My father used to talk to me about respect and how to earn it, and as a black man, it’s important that people respect you. He also told me to never let anyone disrespect me. Over time as life happens and I have learned the importance of having respect. This leads me to live my life a certain way that has provided me opportunities, which, as a young teen on a negative path, would have never happened for me. I am very proud of the man that I have become.

I have five children. My oldest son Gerald Jr. received a full athletic scholarship to Ohio University. My oldest daughter Andrea is currently a senior in high school and has multiple full-ride scholarships for tennis and academics. My middle daughter Lauren is an extremely talented drummer and singer/songwriter; her band has won many talent competitions. My youngest are boy/girl twins also uniquely gifted; Jada my daughter is an extremely gifted dancer and Jordan is on track to follow his brother to athletic stardom. When I look at my children and all that they are accomplishing, sometimes I sit at my desk and cry, because I am so proud that I have been there every step of the way.

The best example I could give of how I turned struggle into success is becoming a teenage father at 17.

I was always smart enough to know that I did not want to be a statistic growing up, but that was once the path I was on. By 13, I had dealings with the police. By 15, I was on probation and had to do a Scared Straight program in Rochester, New York. My best friends growing up were dealing drugs and I had become a product of my environment. I was a ‘D’ student and going nowhere fast. However, I was a star athlete, and sports gave me structure and good men I respected in my life, which may have been my saving grace.

In the black community, what comes with athletic stardom? Girls. In my senior year of high school, I fathered a son, Gerald Jr. To make matters more difficult, I ended up with full custody of him at three months old. This probably saved my life, as I knew at that moment that a lot of what he would be able to do with his life would be predicated on the precedent that I set. By my senior year of high school, I was getting up and getting myself together, dressing my son and dropping him off with the daycare provider every morning, going to football practice every day after school, and working a part-time job. That was a real struggle, and where I learned the definition of perseverance.

Here I am, 18 years old, living out every negative stereotype and statistic for young black males. However, growing up with a father at home, I knew that I had to make an immediate change. During my senior year of high school, I had colleges recruiting me to play football, but because of my low GPA, I was eliminated from most of those opportunities. Also with a child, how could I even make it work? I remember talking to a recruiter on the phone and he asked if I were to come to their school what would I major in. I said, “Electronics engineering,” and he laughed at me.

I graduated in 1995 with a Bachelor of Science degree in electronics engineering technology from Norfolk State University. I have a successful 20-plus-year career as an engineer. I have launched several small business startups and I have impacted many successful young black men, most importantly my first son, as I was just a baby myself when he was born. I say all the time, we grew up together. I don’t know if I would have the type of focus that I do now without him being my driving force to be successful.

My greatest role model would have to be my father. My father was a great man with many flaws and I am grateful to have had the opportunity to learn great life lessons from his life and his words.

My father had a saying: “Do as I say, not what I do.” Somehow I got this message, as my father has had his struggles with alcoholism and drug addiction. To date, I have not done either. The most important thing that my father did for me is showed me how to work hard. I don’t remember a time where my father was not working. He went to work from 7:00 a.m. to 3:00 p.m., then came home and worked until midnight in his own auto shop in our garage. From him, I learned how to work hard, the value of hard work and how to provide for my family.

My father was musically and technically gifted. These gifts have filtered through me and onto my children. My dad said to me, “It’s not the responsibility of the school to educate you, because the school does not know [you] nor can [it] cater to your interests.” This was really important as I learned to teach myself the things that I wanted to learn, which meant I did a lot of reading on my own and enjoyed absorbing knowledge of things that I was interested in. I was a ‘D’ student in high school and none of the teachers knew that I was putting in this type of work on my own and had far surpassed what they were teaching. I was reading engineering books in 9th grade and designing and installing complex audio systems by 10th grade.

My dad past away last July at age 70. I am grateful to have had him in my life and the opportunity to learn from his wisdom and his shortcomings. Definitely my greatest role model.

I believe that I have a responsibility to give back to the community that birthed and nurtured me. I am nothing without all of the black men that poured into me especially my father, uncles, and coaches. These people are the reason I have been so successful. They are a big part of the “why” behind my mission of preparing black boys to succeed in life.

Therefore, the Gerald Moore Online Technology School for Black Boys—and its mission to develop a new generation of computer scientists, engineers, app developers, and designers—is how I pay it forward. Also, my Black Boys Read Book Club and its mission to make it cool for black men to read. I have several young men that I mentor. I have helped many young black men get scholarships to college. I’m all about preparing black boys for success.

My definition of manhood is a simple one: It’s that point where you take total control of your own life, taking full responsibility for your actions and are accountable to those who depend on you for support and stability.

Now, this happens at different ages and stages for men. Some, very few, reach this point at 18. Some never reach this point. I feel I really achieved manhood at age 27, when I first felt in total control and in command of my life and where I was headed.

There is a certain power and mystique that I love, that comes with being an intelligent black man. It’s really hard to quantify but I feel it when I enter a room; it’s that “IT” factor. Being a black man also comes with a struggle of having to do, be and give more, and still not be considered equal. However, I thoroughly enjoy breaking the stereotype of what or who the black man is perceived to be.

What I love most about being a black man is having the love and adoration of a black woman. There is nothing more powerful than how I feel with the support of the black woman in my life. When I say I am going to do something and she says, “Baby, you can do it,” I’m invincible in that moment.