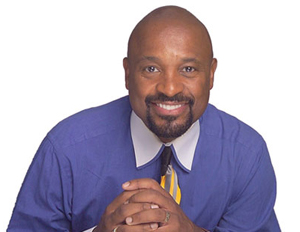 Willie Jolley, Ph.D. was recently rated the No. 1 inspirational speaker following his appearances at the Get Motivated seminars, where he replaced the legendary Zig Ziglar. He is also the host of the top-rated motivational show on Sirius XM, The Willie Jolley Wealthy Ways Show. He speaks globally with corporations such as Walmart, Verizon, Coca-Cola, and Prudential.

[RELATED: Five Steps to Own Your Dreams]

Jolley is the speaker who Ford Motors called on in 2006 when they were on the brink of bankruptcy. He worked with Ford for three years and, in 2009, Ford was able to reject a government bailout and go on to billion-dollar profits. In addition to his speaking success, Jolley is also an award-winning singer, best-selling author, and multibusiness owner. He offered these motivational nuggets to businessmen and women:

Sometimes setbacks produce major comebacks.
After being fired from his nightclub job, Jolley had to make a decision. He decided this setback was a setup for a greater comeback. He took a job with the school system as a drug prevention coordinator and started speaking to kids. After a year Jolley made a life-changing decision to quit his job and go live his dreams–risking losing his home in the process. Before making that miraculous move, he asked himself four questions: What’s the best that could happen? What’s the worst that could happen? What’s the most likely thing to happen? Are you willing to live with the worst to get to the best? Ask yourself these same questions. Like Jolley, be willing to take risks to work toward your dream.

Be consistent.
With a background rooted in faith, Jolley demonstrates his beliefs through motivational speaking. He learned early that there is a way to deliver a message that will inspire others and yet give glory to God. Trusting in biblical principles for success, he sprinkles scripture throughout his messages without trying to convert his audience, and delivers with the same energy level regardless of crowd size. He’s had audiences across the world ranging from 10 people to tens of thousands, but the “who, where, and how manyâ€ never impacts his message.

Know your assets.
Jolley says the best decision he ever made was marrying his wife, who is also his greatest asset. For more than 30 years he always dreamed the big dream and received assistance from his wife with the details. They work in coordination for the business and for their upcoming book on marriage, Make Love, Make Money, and Make it Last. Jolley says individuals should be careful who they marry as that person can be responsible for 90% of your misery or 90% of your joy!

The secret to success is relationships.
People constantly ask Jolley what is the secret to his success. His response: Relationships! Developing relationships! He believes that your network determines your net worth! Becoming a member of the National Speakers Association was an investment he made with the greatest return being the relationships he was able to build. He created friendships, mentorships, and connections that allowed him to shorten his learning curve. From his first book deal to his PBS special to his tours in Australia, Jolley attributes it all to relationships he’s built.

Jolley is building a legacy based off the saying: A good man leaves an inheritance to his children’s great grandchildren. His biggest dream is for future generations to be able to own a business because of the legacy he forged today.

Willie Jolley, Ph.D. is a Speaker Hall of Fame awardee, best-selling author, syndicated columnist, and the host of the No. 1 motivational show on Sirius XM. Expect to see more of Jolley in his own national tours, additional books, and on television throughout the next five years.