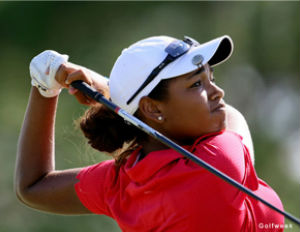 The Olympics viewing community was blown away after seeing 16-year-old Gabby Douglas take over the 2012 Olympics, and now, people are being left speechless as 18-year-old Ginger Howard has become the youngest person to join the Ladies Professional Golf Association (LPGA).

According to Newsone.com, after enrolling at Florida’s IMG Golf Academy, Howard has “won 78 trophies and ranked first in 41 out of 66 events,â€ and decided to petition the “LPGA to allow her to play in its qualifying tournament last year, even though she wasn’t the mandatory 18 years old then.â€

But while life may seem like it’s reached beyond the stars for Ginger, things haven’t always been easy. Her father, Robert Howard, left his job to join her on the road, and had trouble finding a job afterwards, but he is now working with non-profit organization, Golf to End Cancer. And as Howard’s father wasn’t working, her mother was diagnosed with Thyroid Cancer. Thankfully, Ginger’s mother has recovered and is currently working as a nurse with IMG Academies.

With so much going for the golfer on the rise, fans are wondering…could this be the next Tiger?