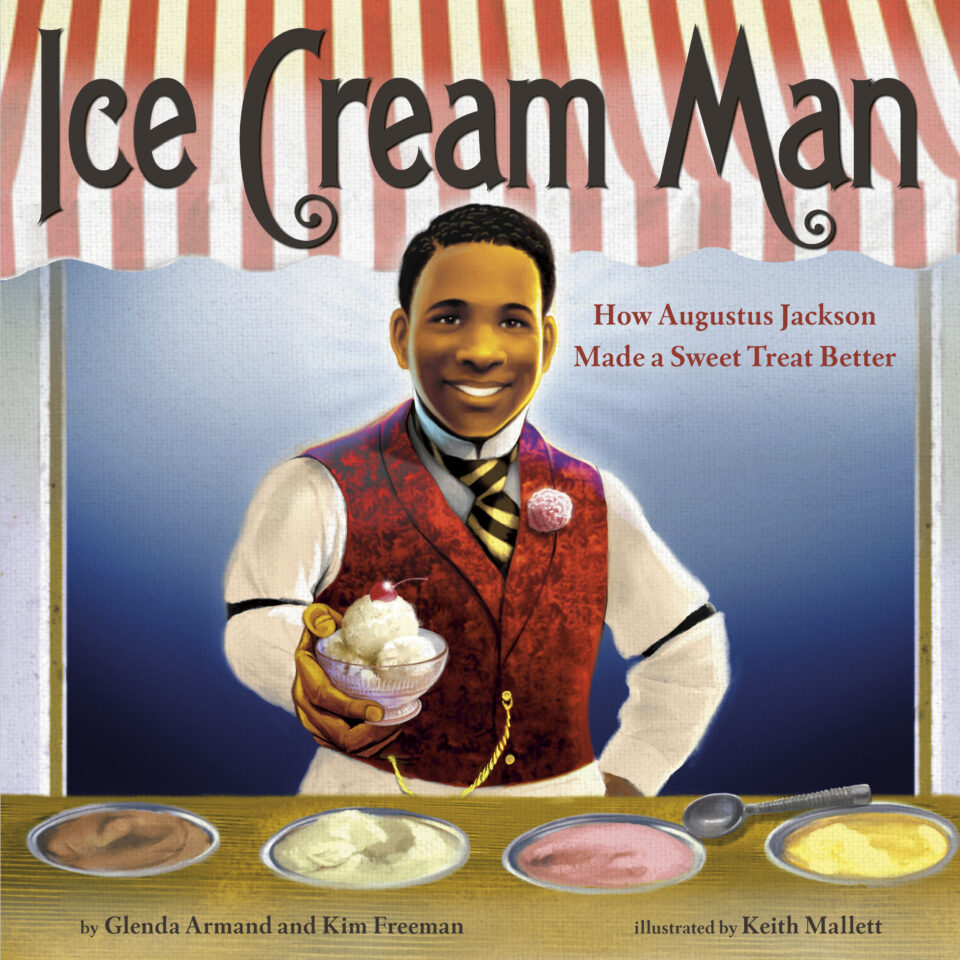 What better way to teach children about Black history than with illustrated, read-aloud biographies?

Glenda Armand is an author in Los Angeles who has had a long career as a teacher and school librarian. She now devotes her time to writing picture-book biographies of people who overcame big obstacles to do great things. Armand began writing as a child, creating poems and stories about different characters like the Flintstones and talking butterflies and elephants who wanted to escape from the circus.

Armand shared with BLACK ENTERPRISE the inspiration and process behind her children’s book, “Ice Cream Man: How Augustus Jackson Made A Sweet Treat Better.”

The biography follows the true story of Jackson who dreamed of being a professional cook. At 12 years old, he applied to work at the White House, where the head cook offered him a position as a kitchen helper, thus leading him to experiment with the frozen dessert. Readers will learn about the life of the ‘little-known African American visionary.’

Tell us a little bit about your background. How long have you been writing and when did you become a published author?

I have been writing since I was a child. I loved to read and write. I wrote poems and stories about the Flintstones and talking butterflies and elephants who wanted to escape from the circus. I wrote plays and recruited my three younger siblings to act in them. For some reason, my three older siblings turned down the chance to star in my productions.

I continued writing for family and friends, usually poems commemorating special milestones. When I became a teacher, I wrote poems and plays for my students. I became a published author when I wrote Love Twelve Miles Long, released in 2011, a story about a young Frederick Douglass and his mother.

What inspired you to write the biography about Augustus Jackson?

Ice Cream Man: How Augustus Jackson Made a Sweet Treat Better had a different beginning than my other biographies. I had not heard of Augustus Jackson until my editor asked me if I would co-author a book about him with Kim Freeman. Kim gets credit for “discovering” Jackson. Once I learned who Augustus Jackson was, I knew that he checked all the boxes as to the kind of person I like to write about. He had the self-confidence, creativity and initiative to overcome the obstacles faced by a free-born black man in pre-Civil War America. And not only was he an inventor and entrepreneur, he also worked in the White house, serving under three presidents!

Describe your research process for the book.

There is very little written about Augustus Jackson. We could find no books dedicated to him. So Kim Freeman and I had to do our research in a roundabout way. Kim came across his name when she was researching ice cream. We read everything we could find online. We found old newspaper articles about ice cream and ice cream parlors that mention him, often just in passing. Kim interviewed the owner of an old-fashioned ice cream parlor, The Franklin Fountain, and the archive librarian of a group called The Ice Screamers. We came across a book, The President’s Kitchen Cabinet by Adrian Miller, that talks about Augustus Jackson’s time at the White House. Although some questions were left unanswered, with these various sources, we were able to piece together Jackson’s life and write our picture book which was so beautifully illustrated by Keith Mallett.

The biography is written for children ages 4-8. What response do you expect from your readers in regards to Augustus Jackson’s biography?

Everyone likes ice cream, so I expect children (even those over 8) to be eager readers/listeners! I think they will enjoy learning a little about the history of ice cream and how it is made. I hope they are inspired by an atypical story about an African American historical figure. Augustus Jackson is a different kind of hero. He didn’t play sports or lead a movement. He followed his dream and made life a little sweeter for those he met.

The teacher in me also hopes that children will learn the little jingles in the book. Memorization is good exercise for the brain. Finally, I hope children, with the help of an adult, make their own ice cream following the simple recipe at the back of the book.

How does the story of Augustus Jackson relate to you personally?

It will help me in my mission to encourage children to dream big. When my younger students would name their career choices, basketball player, video game designer and veterinarian always made the cut. I would always suggest that they expand that list to include entrepreneur. Augustus Jackson is a perfect example of what that means. He combined his creativity and love of ice cream with a fine business sense and became financially successful doing what he loved.

Jackson’s story can help children see themselves as business owners. It expands the field of their dreams. I also relate to Jackson because he and my dad had the same first name. Augustus is not a name you hear every day!

What has drawn you to the genre of biographies?

As a teacher, I found biographies to be an invaluable tool. Not only do they tell the story of a person, they describe an era, a time and a place. Biographies humanize the study of history And picture book biographies can be used at any age level to introduce a topic, such as slavery, or the civil rights movement. I have used picture books with pre-kindergartners to adult students. They are like appetizers before the main course.

I also love sharing accounts of little known African American trailblazers. My hope is that these stories will encourage young people to persevere towards their dreams despite any obstacles they may face. I am especially drawn to stories of enslaved African Americans, such as Frederick Douglass, or those born free in antebellum America, as was Augustus Jackson. To tell their stories is to recognize their strength, honor their sacrifices and celebrate the triumph of the human spirit.

As a teacher of many years, how have your students inspired your books/writing?

My adult life has been dedicated to children and books. As a teacher and a librarian, I have taught children how to read and demonstrated a love of reading that I hope has helped them to become lifelong readers and learners. I have taught them that reading is a skill that will take them wherever they want to go. Books will always be a source of knowledge and pleasure.

Now, as an author, I hope that my books will be among those that inspire children, teach them, entertain them and encourage them to dream big.

What important piece of advice would you like for parents to know about your children’s books?

I would like them to know my books are meant to be shared as read-alouds. I hope the books will spark discussions and create opportunities for adults to share their experiences with their children  and for children to express their ideas.

Armand co-wrote the book with Kim Freeman, a debut children’s book writer who enjoys writing books that inspire children to follow their dreams. What was it like working with Armand as co-author for the Augustus Jackson biography?

It was a pleasure to work with Glenda on this project. I have wanted to write children’s books for as long as I can remember, and co-authoring my debut with such a talented and wonderful person was an amazing experience. We had a great time researching and writing this story together. I believe that children’s books can make a huge difference in a child’s life and we are looking forward to sharing Augustus Jackson’s inspirational story with young readers all over the world.

The biography was illustrated by NAACP Image Award-nominated artist and designer Keith Mallett. How did Armond’s writing inspire the illustrations used in the book?

Glenda and Kim’s telling of Augustus’ story intrigued me because it was the tale of a successful free black man during the time of slavery in America. Hopefully my illustrations will help to show a new generation of readers that with tenacity and dedication their dreams can come true.

Ice Cream Man: How Augustus Jackson Made a Sweet Treat Better will be available for purchase on January 17, 2023, and it includes an easy-to-follow ice cream recipe so readers can make their own.