5 of the Worlds Best Train Journeys 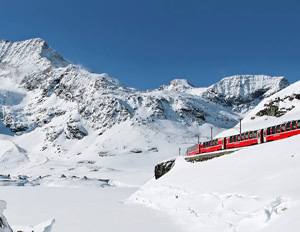 If you’re looking for a new type of vacation in 2015, exploring some of the worlds’ most beautiful landscapes by rail is more than worthwhile. From Pretoria to Cape Town to the Himalayas and California, there’s no shortage of places to journey by rail.Â  Here are a few destinations to keep in mind.

A spectacular scenic ride on the Bernina Express is a 4-hour, 90-mile journey from Switzerland to Italy. Be prepared for a unique adventure as the car climbs 2,253 meters above seal level.Â While seated in panoramic sightseeing cars you’ll be whisked though 55 tunnels, 196 bridges, at about around 20mph.

The Golden Chariot train, a winner of the 2013 Asia’s leading luxury train’ award, is recognized as one of the best ways to experience the less touristy side of South India.Â  Throughout your route you’ll stop at Nagarhole National Park–where you’ll see tigers, leopards and other wildlife, navigate to the world heritage sites ofÂ Hampi andÂ Badami then finally you’ll arrive at the beautiful beaches in Goa. The train also features onboard rooms, ensuite showers and dinning cars.

Amtrak’s Coast Starlight connects you to some of the best cities on the West Coast– Santa Barbara, the San Francisco Bay Area, Sacramento and Portland. From stunning coastlines and snow-covered peaks to lush forests and rivers, there’s plenty of gorgeous postcard ready landscapes to cover.Â  And sleeping car passengers receive complimentary meals (excluding alcohol) in the dinning car.

A dreamy train ride with spectacular views of waterfalls, flocks of wild ostrich, sunflower farms, and even a stop at the diamond mines. As you approach the end of your rail adventure you’ll witness some of the world’s finest vineyards before pulling beneath Table Mountain.

The Eastern & Orient Express takes you through Bangkok, over the River Kwai, down the Malaysian coast onto Kuala Lumpa and onto the tropical beaches of Penang. During this picturesque journey through rainforest, paddy fields and plantations, you’ll also make several sightseeing stops.Â  Luxury train amenities includes presidential suites, state rooms, five star meals such as lamb, sea base and afternoon tea, and an open air observation deck for photographing the perfect landscape.

Have you taken a rail journey before? If so, what’s your favorite train journey and why? Share with us in the comments below or #Soundoff and follow @BlackEnterprise on Twitter.